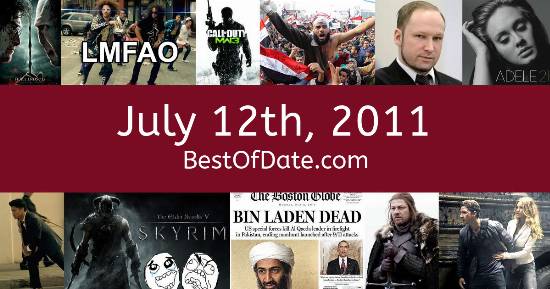 These songs were on top of the music charts in the United States and the United Kingdom on July 12th, 2011.

The movie "Transformers 3" was at the top of the Box Office on this day.

The downgrade to junk status was a low point in Ireland's history. I remember that period very well. It was a bleak recession, filled with bad news, and it seemed like there was no future. Thankfully, we managed to turn the corner and recover over the next couple of years.
Posted on April 11th, 2022 03:59

The date is July 12th, 2011, and it's a Tuesday. Anyone born today will have the star sign Cancer. It's summer, so the temperatures are warmer and the evenings are longer than usual.

In America, the song Give Me Everything by Pitbull is on top of the singles charts. Over in the UK, Louder by DJ Fresh is the number one hit song. Barack Obama is currently the President of the United States, and the movie Transformers 3 is at the top of the Box Office.

A civil war is raging on in Libya. Large battles are taking place between Colonel Gaddafi's government forces and Libyan rebels, who are being supported by NATO. A fad called "planking", which involves a person lying face down in an unusual location, is popular at the moment. A blackhat hacking group called "LulzSec" are currently in the news following a number of high profile attacks on companies such as Sony.

An Advice Animal meme called "Good Guy Greg" is beginning to take off in popularity. Google have just launched their new social network "Google+" and people are wondering if it can challenge Facebook for the top spot. There is public outrage following the recent announcement that Casey Anthony has been found not guilty of murdering her 2-year-old daughter Caylee.

Former First Lady Betty Ford has passed away at the age of 93. In the United Kingdom, the controversial "News of the World" newspaper has just published its last issue. Ireland's economic woes are continuing following Moody's recent decision to downgrade the country's debt status to "Junk".

If you were to travel back to this day, notable figures such as Amy Winehouse, Zyzz, Steve Jobs and Joe Frazier would all be still alive. On TV, people are watching popular shows such as "Dexter", "Mad Men", "Glee" and "Game of Thrones". Meanwhile, gamers are playing titles such as "Farmville", "StarCraft II: Wings of Liberty", "Call of Duty: Black Ops" and "Homefront".

Children and teenagers are currently watching television shows such as "Dora the Explorer", "The Fairly OddParents", "iCarly" and "Big Time Rush". If you're a kid or a teenager, then you're probably playing with toys such as the Xbox 360, the PlayStation 3, the KidiZoom Camera and ZhuZhu Pets.

These are trending news stories and fads that were prevalent at this time. These are topics that would have been in the media on July 12th, 2011.

Check out our personality summary for people who were born on July 12th, 2011.

Television shows that people were watching in July, 2011.

Popular video games that people were playing in July of 2011.

If you are looking for some childhood nostalgia, then you should check out July 12th, 2017 instead.

Barack Obama was the President of the United States on July 12th, 2011.

David Cameron was the Prime Minister of the United Kingdom on July 12th, 2011.

Enter your date of birth below to find out how old you were on July 12th, 2011.
This information is not transmitted to our server.