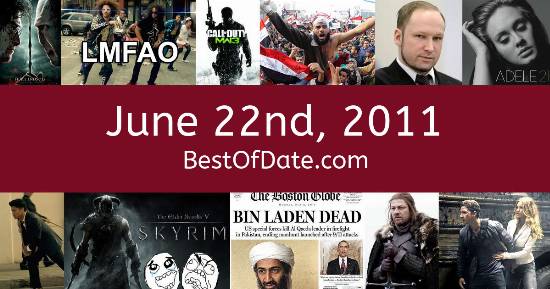 These songs were on top of the music charts in the United States and the United Kingdom on June 22nd, 2011.

The top "Box Office" movie on this date was the film "Green Lantern".

I remember reading news stories about Whitey Bulger while he was still on the most wanted list. They were saying that he had been spotted in this place and that place, and that he had traveled to London at some point. I honestly thought that they would never find him.
Posted on June 22nd, 2022 06:03

Everyone thought that André Villas-Boas was going to be the next Mourinho because he was young, Portuguese and had done well with Porto. He also had no playing experience. It didn't take long before those predictions fell apart.
Posted on June 22nd, 2022 07:59

The date is June 22nd, 2011, and it's a Wednesday. Anyone born today will have the star sign Cancer. It's summer, so the temperatures are warmer and the evenings are longer than usual.

In America, the song Rolling In The Deep by Adele is on top of the singles charts. Over in the UK, Changed The Way You Kissed Me by Example is the number one hit song. Barack Obama is currently the President of the United States, and the movie Green Lantern is at the top of the Box Office.

A blackhat hacking group called "LulzSec" are currently in the news following a number of high profile attacks on companies such as Sony. An Advice Animal meme called "Good Guy Greg" is beginning to take off in popularity. In Canada, a riot has broken out in Vancouver following the Vancouver Canucks defeat against the Boston Bruins in ice hockey. A photo of a couple kissing on the ground while riot police stand around them is currently going viral.

Democratic congressman Anthony Weiner has announced his intention to resign from Congress following revelations that he sent explicit photographs to a woman on Twitter and then lied about it. Tributes are pouring in following the news that Jackass member Ryan Dunn has been killed in a car crash at the age of 34. People are stunned by the news that fugitive Whitey Bulger has finally been arrested in Santa Monica, California, after 16 years of being on the run.

If you were to travel back to this day, notable figures such as Betty Ford, Amy Winehouse, Zyzz and Steve Jobs would all be still alive. On TV, people are watching popular shows such as "One Tree Hill", "Grey's Anatomy", "Dexter" and "RuPaul's Drag Race". Meanwhile, gamers are playing titles such as "Super Meat Boy", "Crysis 2", "L.A. Noire" and "The Legend of Zelda: Ocarina of Time 3D".

Kids and teenagers are watching TV shows such as "Dora the Explorer", "Ben 10", "Curious George" and "Victorious". Popular toys at the moment include the likes of the Xbox 360, the PlayStation 3, the KidiZoom Camera and the iPad.

These are trending news stories and fads that were prevalent at this time. These are topics that would have been in the media on June 22nd, 2011.

Check out our personality summary for people who were born on June 22nd, 2011.

If you are looking for some childhood nostalgia, then you should check out June 22nd, 2017 instead.

Barack Obama was the President of the United States on June 22nd, 2011.

David Cameron was the Prime Minister of the United Kingdom on June 22nd, 2011.

Enter your date of birth below to find out how old you were on June 22nd, 2011.
This information is not transmitted to our server.