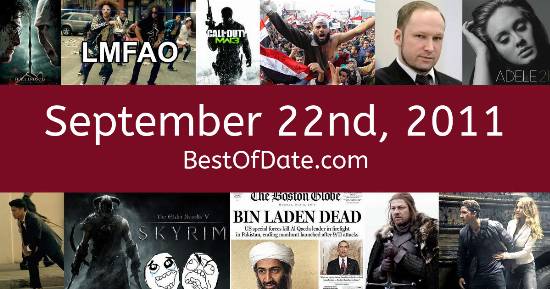 These songs were on top of the music charts in the United States and the United Kingdom on September 22nd, 2011.

The top "Box Office" movie on this date was the film "Contagion".

The date is September 22nd, 2011, and it's a Thursday. Anyone born today will have the star sign Virgo. Schools and colleges are starting again and Autumn has officially arrived. As a result, temperatures are beginning to cool and trees are starting to shed their leaves.

The earthy smells of fall have started to fill the air. In America, the song Someone Like You by Adele is on top of the singles charts. Over in the UK, What Makes You Beautiful by One Direction is the number one hit song.

Barack Obama is currently the President of the United States, and the movie Contagion is at the top of the Box Office. In the United Kingdom, David Cameron is the current Prime Minister. The term "hipster" is currently growing in use. The word is being used to describe people who are pretentious and deliberately anti-mainstream.

A fad called "planking", which involves a person lying face down in an unusual location, is popular at the moment. An Advice Animal meme called "Good Guy Greg" is beginning to take off in popularity. Meanwhile, in the Middle East, protests in Syria have snowballed and a civil war has started. Armed militias are currently springing up across the country.

The catchphrase "We are the 99%" has become popular among those wanting to spread awareness about wealth inequality in America. People are currently posting photographs of themselves holding placards that describe their financial situation. A civil war is continuing to rage on in Libya. Libyan rebels, with the support of NATO, have captured the capital Tripoli. They are now beginning to make rapid advances into pro-Gaddafi territory. An advertisement video for American taxidermist Chuck Testa has gone viral and Internet users are repeating the catchphrase "Nope! Chuck Testa!"

The 2011 Rugby World Cup is currently taking place in New Zealand. A new app called "Snapchat" has just been released. American pop duo LMFAO have released a new song called "Sexy and I Know It".

The Occupy Wall Street movement is receiving widespread media attention. Rihanna and Calvin Harris have just released the song "We Found Love". If you were to travel back to this day, notable figures such as Steve Jobs, Joe Frazier, Heavy D and Gary Speed would all be still alive.

On TV, people are watching popular shows such as "Desperate Housewives", "Gossip Girl", "The Big Bang Theory" and "White Collar". Meanwhile, gamers are playing titles such as "Civilization V", "Dead Space 2", "Total War: Shogun 2" and "The Legend of Zelda: Ocarina of Time 3D". Kids and teenagers are watching TV shows such as "Peppa Pig", "Curious George", "Wizards of Waverly Place" and "Jake and the Never Land Pirates".

If you're a kid or a teenager, then you're probably playing with toys such as the PlayStation 3, the KidiZoom Camera, the iPad and the LeapPad Explorer.

These are trending news stories and fads that were prevalent at this time. These are topics that would have been in the media on September 22nd, 2011.

Check out our personality summary for people who were born on September 22nd, 2011.

Television shows that people were watching in September, 2011.

Popular video games that people were playing in September of 2011.

If you are looking for some childhood nostalgia, then you should check out September 22nd, 2017 instead.

Barack Obama was the President of the United States on September 22nd, 2011.

David Cameron was the Prime Minister of the United Kingdom on September 22nd, 2011.

Enter your date of birth below to find out how old you were on September 22nd, 2011.
This information is not transmitted to our server.

Here are some fun statistics about September 22nd, 2011.