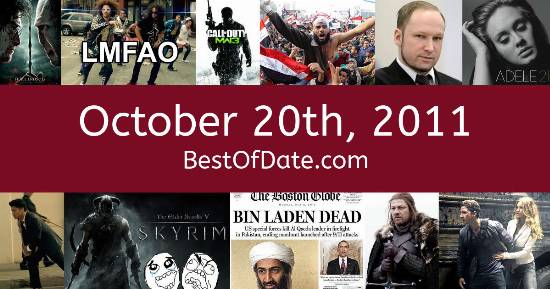 Songs that were on top of the music singles charts in the USA and the United Kingdom on October 20th, 2011.

The date is October 20th, 2011 and it's a Thursday. Anyone born today will have the star sign Libra. The summer is long gone. Temperatures have started to become much cooler and the evenings are beginning to get darker.

Fallen leaves have carpeted driveways, lawns, pathways and sidewalks and there's a fresh earthy scent in the ear. Halloween of 2011 is quickly approaching and stores are selling costumes and decorations. In America, the song Someone Like You by Adele is on top of the singles charts.

Over in the UK, We Found Love by Rihanna ft Calvin Harris is the number one hit song. Barack Obama is currently the President of the United States and the movie Real Steel is at the top of the Box Office. In the United Kingdom, David Cameron is the current Prime Minister.

The catchphrase "We are the 99%" has become popular among those wanting to spread awareness about wealth inequality in America. People are currently posting photographs of themselves holding placards that describe their financial situation. An advertisement video for American taxidermist Chuck Testa has gone viral and Internet users are repeating the catchphrase "Nope! Chuck Testa!" The 2011 Rugby World Cup is currently taking place in New Zealand.

In soccer, Liverpool striker Luis Suarez has been accused of racially abusing Manchester United defender Patrice Evra. Coronation Street actress Betty Driver has passed away at the age of 91 after suffering from pneumonia. The video game "Batman: Arkham City" has just been released. Israeli soldier Gilad Shalit has been released by Hamas after five years of captivity.

The civil war in Libya has come to an end. Colonel Muammar Gaddafi has been captured and killed by rebel forces in Sirte. There are currently calls for an investigation into his death. Hostilities across the country have ceased and the NTC have declared victory. On TV, people are watching popular shows such as "Futurama", "CSI: Miami", "House" and "Community". Meanwhile, gamers are playing titles such as "Assassin's Creed: Brotherhood", "Homefront", "Portal 2" and "Batman: Arkham City".

Kids and teenagers are watching TV shows such as "Peppa Pig", "Wizards of Waverly Place", "Glee" and "Victorious". If you're a kid or a teenager, then you're probably playing with toys such as the Xbox 360, the PlayStation 3, the KidiZoom Camera and the LeapPad Explorer.

If you are looking for some childhood nostalgia, then check out October 20th, 2017 instead.

Barack Obama was the President of the United States on October 20th, 2011.

David Cameron was the Prime Minister of the United Kingdom on October 20th, 2011.

Enter your date of birth below to find out how old you were on October 20th, 2011.

Here are some fun statistics about October 20th, 2011.