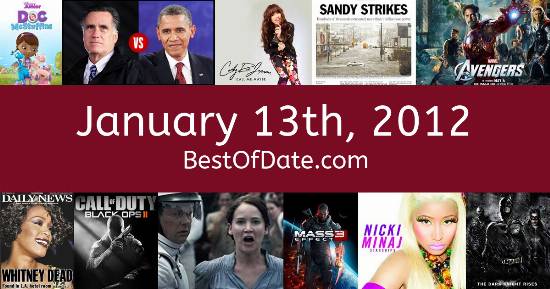 Songs that were on top of the music singles charts in the USA and the United Kingdom on January 13th, 2012.

The date is January 13th, 2012 and it's a Friday. Anyone born today will have the star sign Capricorn. Currently, people have "that Friday feeling" and are looking forward to the weekend.

The Christmas holiday season is long over, the decorations have been taken down and a sense of normality has returned. In America, the song Sexy And I Know It by LMFAO is on top of the singles charts. Over in the UK, Good Feeling by Flo Rida is the number one hit song.

Barack Obama is currently the President of the United States and the movie Contraband is at the top of the Box Office. In the United Kingdom, David Cameron is the current Prime Minister. Video rental stores such as Blockbuster are continuing to close their doors at the moment. This is due to the increasing popularity of online streaming services such as Netflix and Hulu.

It's 2012, so the music charts are being dominated by artists such as Carly Rae Jepsen, Gotye, Flo Rida, LMFAO and Ellie Goulding. A tragic hot air balloon crash near Carterton, New Zealand, has resulted in the deaths of all 11 people on board. A cringe-worthy Youtube video called "My Video for Briona" is going viral at the moment. The videos consists of a teenager expressing his love for his girlfriend by giving a soppy 2-minute-long monologue.

Barcelona star Lionel Messi has won his third Ballon d'Or prize after being Real Madrid's Cristiano Ronaldo and Barcelona team-mate Xavi. 33 people have been left dead after a cruise ship called the Costa Concordia crashes on the coast of Italy. The captain of the ship, Francesco Schettino, has been arrested. On TV, people are watching popular shows such as "Dora the Explorer", "Extreme Makeover: Home Edition", "How I Met Your Mother" and "Jersey Shore".

Meanwhile, gamers are playing titles such as "Portal 2", "Gears of War 3", "Batman: Arkham City" and "The Elder Scrolls V: Skyrim". Kids and teenagers are watching TV shows such as "Dora the Explorer", "LazyTown", "Glee" and "Big Time Rush". If you're a kid or a teenager, then you're probably playing with toys such as the Xbox 360, the PlayStation 3, the LeapPad Explorer and Skylanders Giants figures.

If you are looking for some childhood nostalgia, then check out January 13th, 2018 instead.

Barack Obama was the President of the United States on January 13th, 2012.

David Cameron was the Prime Minister of the United Kingdom on January 13th, 2012.

Enter your date of birth below to find out how old you were on January 13th, 2012.

Here are some fun statistics about January 13th, 2012.