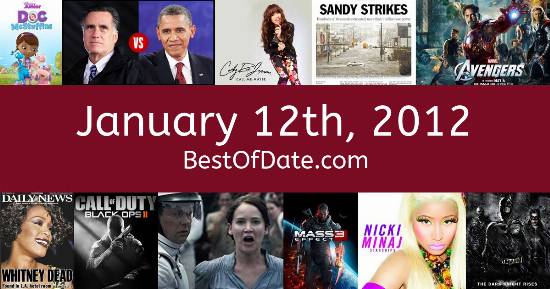 Songs that were on top of the music singles charts in the USA and the United Kingdom on January 12th, 2012:

The date is January 12th, 2012 and it's a Thursday. Anyone born today will have the star sign Capricorn. The Christmas holiday season is long over, the decorations have been taken down and a sense of normality has returned.

In America, the song Sexy And I Know It by LMFAO is on top of the singles charts. Over in the UK, Good Feeling by Flo Rida is the number one hit song. Barack Obama is currently the President of the United States and the movie The Devil Inside is at the top of the Box Office.

The slang phrase "YOLO" is continuing to rise in usage. In his song "The Motto", rapper Drake has further popularized the acronym, which stands for "You only live once." It's 2012, so the music charts are being dominated by artists such as Carly Rae Jepsen, Gotye, Flo Rida, LMFAO and Ellie Goulding. A tragic hot air balloon crash near Carterton, New Zealand, has resulted in the deaths of all 11 people on board.

A cringe-worthy Youtube video called "My Video for Briona" is going viral at the moment. The videos consists of a teenager expressing his love for his girlfriend by giving a soppy 2-minute-long monologue. Barcelona star Lionel Messi has won his third Ballon d'Or prize after being Real Madrid's Cristiano Ronaldo and Barcelona team-mate Xavi. On TV, people are watching popular shows such as "Bones", "Glee", "Community" and "Jersey Shore".

Meanwhile, gamers are playing titles such as "Crysis 2", "Portal 2", "Batman: Arkham City" and "Battlefield 3". Children and teenagers are currently watching television shows such as "Mickey Mouse Clubhouse", "iCarly", "Glee" and "Jake and the Never Land Pirates". If you're a kid or a teenager, then you're probably playing with toys such as "Xbox 360", "PlayStation 3" and "The LeapPad Explorer".

Celebrities, historical figures and noteable people who were born on the 12th of January:

Who was the Prime Minister of the United Kingdom on January 12th, 2012?

Enter your date of birth below to find out how old you were on January 12th, 2012.

Looking for some nostalgia? Here are some Youtube videos relating to January 12th, 2012. Please note that videos are automatically selected by Youtube and that results may vary! Click on the "Load Next Video" button to view the next video in the search playlist. In many cases, you'll find episodes of old TV shows, documentaries, music videos and soap dramas.

Here are some fun statistics about January 12th, 2012.