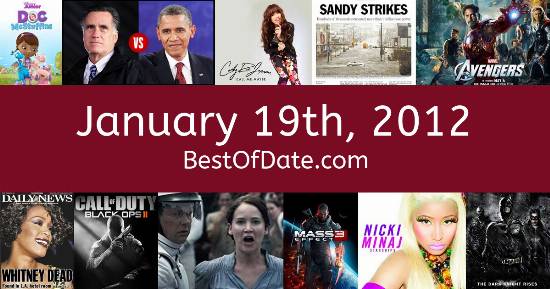 These songs were on top of the music charts in the United States and the United Kingdom on January 19th, 2012.

The movie "Contraband" was at the top of the Box Office on this day.

The following comments about January 19th, 2012 were written by our visitors.

Even though I barely used MegaUpload back in the day, it just seems like yesterday that it shut down.
Posted on January 20th, 2023 00:41

The date is January 19th, 2012, and it's a Thursday. Anyone born today will have the star sign Capricorn. In America, the song We Found Love by Rihanna ft Calvin Harris is on top of the singles charts.

Over in the UK, Domino by Jessie J is the number one hit song. Barack Obama is currently the President of the United States, and the movie Contraband is at the top of the Box Office. In the United Kingdom, David Cameron is the current Prime Minister.

The slang phrase YOLO (You only live once) was beginning to rise in popularity at this time. It's 2012, so the music charts are being dominated by artists such as Carly Rae Jepsen, Gotye, Flo Rida, LMFAO and Ellie Goulding. A cringe-worthy Youtube video called "My Video for Briona" is going viral at the moment. The videos consists of a teenager expressing his love for his girlfriend by giving a soppy 2-minute-long monologue.

33 people have been left dead after a cruise ship called the Costa Concordia crashes on the coast of Italy. The captain of the ship, Francesco Schettino, has been arrested. A series of protests are being held against the Stop Online Piracy Act (SOPA). Websites such as Wikipedia in Google are coordinating service blackouts in opposition to the bill. Popular file storage website MegaUpload.com has just been shut down by the FBI for alleged copyright infringement.

If you were to travel back to this day, notable figures such as Whitney Houston, Trayvon Martin, Edd Gould and MCA would all be still alive. On TV, people are watching popular shows such as "Prison Break", "Mad Men", "Breaking Bad" and "True Blood". Meanwhile, gamers are playing titles such as "Total War: Shogun 2", "Duke Nukem Forever", "Gears of War 3" and "Metal Gear Solid HD Collection".

Children and teenagers are currently watching television shows such as "Peppa Pig", "Curious George", "WordGirl" and "Austin & Ally". If you're a kid or a teenager, then you're probably playing with toys such as the Xbox 360, the PlayStation 3, the KidiZoom Camera and Skylanders Giants figures.

These are trending news stories and fads that were prevalent at this time. These are topics that would have been in the media on January 19th, 2012.

News stories, pop culture trends, and other events that happened around January 19th, 2012.

Check out our personality summary for people who were born on January 19th, 2012.

Television shows that people were watching in January, 2012.

Popular video games that people were playing in January of 2012.

If you are looking for some childhood nostalgia, then you should check out January 19th, 2018, instead.

Celebrities, historical figures, and other notable people who were born on January 19th.

Barack Obama was the President of the United States on January 19th, 2012.

Find out what your age was on January 19th, 2012, by entering your DOB below.
This information is not saved on our server.

Here are some fun statistics about January 19th, 2012.