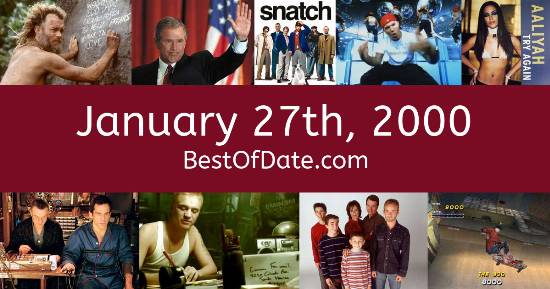 January 27th, 2000 relates to an event in a movie, book, game or television series:

Songs that were on top of the music singles charts in the USA and the United Kingdom on January 27th, 2000:

The date is January 27th, 2000 and it's a Thursday. Anyone born today will have the star sign Aquarius. In America, the song What A Girl Wants by Christina Aguilera is on top of the singles charts.

Over in the UK, The Masses Against The Classes by Manic Street Preachers is the number one hit song. Bill Clinton is currently the President of the United States and the movie Next Friday is at the top of the Box Office. In the United Kingdom, Tony Blair is the current Prime Minister.

The Nokia 3210 is currently one of the most popular cell phones on the market. Pokemon has become one of the most popular franchises in the world, as trading cards, toys and handheld games gross over one billion dollars. It's the year 2000, so the music charts are being dominated by the likes of Christina Aguilera, Savage Garden, Destiny's Child, Santana and Enrique Iglesias.

People are watching popular TV shows such as "Frasier", "JAG", "Everybody Loves Raymond" and "Dawson's Creek". Meanwhile, gamers are playing titles such as "Dino Crisis", "Age of Empires II: The Age of Kings", "Grand Theft Auto 2" and "Donkey Kong 64". Children and teenagers are currently watching television shows such as "CatDog", "The Powerpuff Girls", "SpongeBob SquarePants" and "Roswell".

If you're a kid or a teenager, then you're probably playing with toys such as "PlayStation (PS1)", "Groovy Girls", "Game Boy Color" and "The Dreamcast".

Celebrities, historical figures and noteable people that were born on the 27th of January:

Who was the Prime Minister of the United Kingdom on January 27th, 2000?

Enter your date of birth below to find out how old you were on January 27th, 2000.

Looking for some nostalgia? Here are some Youtube videos relating to January 27th, 2000. Please note that videos are automatically selected by Youtube and that results may vary! Click on the "Load Next Video" button to view the next video in the search playlist. In many cases, you'll find episodes of old TV shows, documentaries, music videos and soap dramas.

Here are some fun statistics about January 27th, 2000.