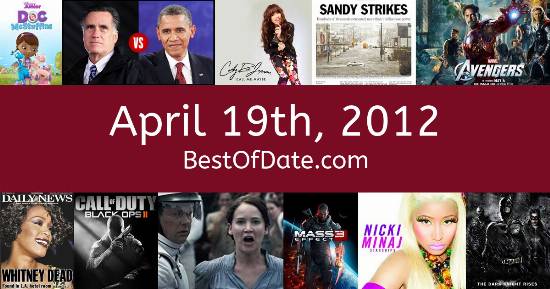 Songs that were on top of the music singles charts in the USA and the United Kingdom on April 19th, 2012.

The date is April 19th, 2012 and it's a Thursday. Anyone born today will have the star sign Aries. The summer of 2012 is drawing closer and temperatures have started to rise.

In America, the song We Are Young by Fun ft Janelle Monae is on top of the singles charts. Over in the UK, Call Me Maybe by Carly Rae Jepsen is the number one hit song. Barack Obama is currently the President of the United States and the movie The Hunger Games is at the top of the Box Office.

It's 2012, so the music charts are being dominated by artists such as Carly Rae Jepsen, Gotye, Flo Rida, LMFAO and Ellie Goulding. Meanwhile, a new photo-sharing app called Instagram is currently surging in popularity. The Matrix character "Morpheus" has become a new Internet meme.. The meme typically starts off with the line "What if I told you", followed by a revelation that the creator wants to share.

A meme called "Ridiculously Photogenic Guy" is extremely popular at the moment. A video of Oklahoma City resident Kimberly Wilkins saying "Ain't Nobody Got Time for That" during an interview with a local news station is currently going viral. The interview has sparked the creation of several memes and music remixes over the past couple of weeks. North Korea's attempt to launch an observation satellite has ended in failure. The satellite exploded shortly after launch.

A 2-D video projection of deceased rapper Tupac Shakur performing at Coachella has sparked people's interest. The hit song "Call Me Maybe" by Carly Rae Jepsen is currently the subject of a number of parody and lip dub videos. On TV, people are watching popular shows such as "Futurama", "CSI: NY", "How I Met Your Mother" and "The Walking Dead".

Meanwhile, gamers are playing titles such as "Duke Nukem Forever", "Gears of War 3", "Battlefield 3" and "Call of Duty: Modern Warfare 3". Kids and teenagers are watching TV shows such as "Dora the Explorer", "LazyTown", "Ben 10" and "Glee". Popular toys at the moment include the likes of the Xbox 360, the PlayStation 3 and the LeapPad Explorer.

If you are looking for some childhood nostalgia, then check out April 19th, 2018 instead.

Barack Obama was the President of the United States on April 19th, 2012.

David Cameron was the Prime Minister of the United Kingdom on April 19th, 2012.

Enter your date of birth below to find out how old you were on April 19th, 2012.