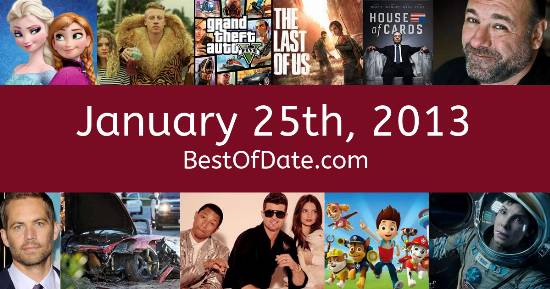 Songs that were on top of the music singles charts in the USA and the United Kingdom on January 25th, 2013:

The date is January 25th, 2013 and it's a Friday. Anyone born today will have the star sign Aquarius. Currently, people have "that Friday feeling" and are looking forward to the weekend.

In America, the song Locked Out Of Heaven by Bruno Mars is on top of the singles charts. Over in the UK, Get Up by Bingo Players is the number one hit song. Barack Obama is currently the President of the United States and the movie Hansel and Gretel is at the top of the Box Office.

In Ireland, the nation is mourning the death of Detective Garda Adrian Donohoe, who was recently shot dead by an armed gang in County Louth. On TV, people are watching popular shows such as "Breaking Bad", "The Vampire Diaries", "White Collar" and "Game of Thrones". Meanwhile, gamers are playing titles such as "Diablo III", "Sleeping Dogs", "Borderlands 2" and "Call of Duty: Black Ops II".

Kids and teenagers are watching TV shows such as "Big Time Rush", "Jake and the Never Land Pirates", "Lab Rats: Bionic Island" and "Dog with a Blog". If you're a kid or a teenager, then you're probably playing with toys such as "Xbox 360", "PlayStation 3" and "The Wii U".

Who was the Prime Minister of the United Kingdom on January 25th, 2013?

Enter your date of birth below to find out how old you were on January 25th, 2013.

Looking for some nostalgia? Here are some Youtube videos relating to January 25th, 2013. Please note that videos are automatically selected by Youtube and that results may vary! Click on the "Load Next Video" button to view the next video in the search playlist. In many cases, you'll find episodes of old TV shows, documentaries, music videos and soap dramas.

Here are some fun statistics about January 25th, 2013.