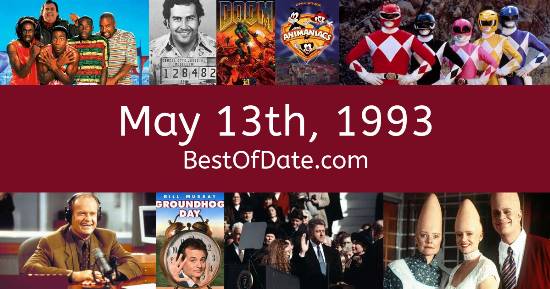 These songs were on top of the music charts in the United States and the United Kingdom on May 13th, 1993.

The movie "Dragon: The Bruce Lee Story" was at the top of the Box Office on this day.

The date is May 13th, 1993, and it's a Thursday. Anyone born today will have the star sign Taurus. The summer of 1993 has finally arrived. The weather has warmed up and the evenings are brighter than usual.

In America, the song Informer by Snow is on top of the singles charts. Over in the UK, Five Live (EP) by George Michael & Queen with Lisa Stansfield is the number one hit song. Bill Clinton is currently the President of the United States, and the movie Dragon: The Bruce Lee Story is at the top of the Box Office.

A playing discs game called "Pogs" is currently spreading in popularity throughout the world. It's 1993, so radio stations are being dominated by the likes of Meat Loaf, UB40, Snow, Haddaway, Whitney Houston, Take That, Janet Jackson and Mariah Carey. In music, Miami group "Tag Team" have just released their new single "Whoomp! (There It Is)". Meanwhile, English reggae group UB40 have also released their new song "Can't Help Falling in Love".

In television news, the final episode of "The Wonder Years" has just been aired. The coming-of-age series had been running since 1988. In the United States, media outlets are reporting that two runways at Los Angeles International Airport were shut down for an hour so that US President Bill Clinton could land and get a haircut. The controversy is currently being referred to as "Haircutgate", with newspapers calling it the "most expensive haircut in history". If you were to travel back to this day, notable figures such as Conway Twitty, Dražen Petrović, Pat Nixon and Reggie Lewis would all be still alive.

On TV, people are watching popular shows such as "Knots Landing", "Star Trek: The Next Generation", "In the Heat of the Night" and "Step by Step". Meanwhile, gamers are playing titles such as "Paperboy", "Desert Strike ", "Kirby's Dream Land" and "Final Fantasy V". Kids and teenagers are watching TV shows such as "Saved by the Bell", "Home Improvement", "Goof Troop" and "X-Men: The Animated Series".

If you're a kid or a teenager, then you're probably playing with toys such as the Easy-Bake Oven, the Game Boy, the SEGA Game Gear and Littlest Pet Shop.

These are trending news stories and fads that were prevalent at this time. These are topics that would have been in the media on May 13th, 1993.

News stories and other events that happened around May 13th, 1993.

Check out our personality summary for people who were born on May 13th, 1993.

Television shows that people were watching in May, 1993.

Popular video games that people were playing in May of 1993.

If you are looking for some childhood nostalgia, then you should check out May 13th, 1999 instead.

Historical weather information for May 13th, 1993.

Bill Clinton was the President of the United States on May 13th, 1993.

John Major was the Prime Minister of the United Kingdom on May 13th, 1993.

Find out what your age was on May 13th, 1993, by entering your DOB below.
This information is not saved on our server.