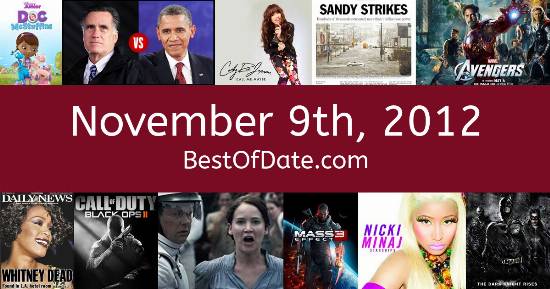 Songs that were on top of the music singles charts in the USA and the United Kingdom on November 9th, 2012.

The date is November 9th, 2012 and it's a Friday. Anyone born today will have the star sign Scorpio. Currently, people have "that Friday feeling" and are looking forward to the weekend.

It's November, so the evenings are getting darker and the days are getting colder. In America, the song One More Night by Maroon 5 is on top of the singles charts. Over in the UK, Candy by Robbie Williams is the number one hit song.

Barack Obama is currently the President of the United States and the movie Skyfall is at the top of the Box Office. In the United Kingdom, David Cameron is the current Prime Minister. Video rental stores such as Blockbuster are continuing to close their doors at the moment. This is due to the increasing popularity of online streaming services such as Netflix and Hulu.

It's 2012, so the music charts are being dominated by artists such as Carly Rae Jepsen, Gotye, Flo Rida, LMFAO and Ellie Goulding. Microsoft have released their new operating system "Windows 8". In America, the cleanup following Hurricane Sandy is underway. American Red Cross and FEMA personnel are carrying out search and rescue missions and providing medical supplies. Over six million people have been left without power and 160 people have been killed by the hurricane.

The recent passing of "Amendment 64" means that Colorado has become the first US state to legalize the recreational use of marijuana. President Barack Obama has just beaten Republican nominee Mitt Romney in the 2012 US presidential election, thereby securing a second term in office. On TV, people are watching popular shows such as "Desperate Housewives", "Bones", "White Collar" and "Game of Thrones".

Meanwhile, gamers are playing titles such as "Terraria", "The Elder Scrolls V: Skyrim", "Mass Effect 3" and "Borderlands 2". Kids and teenagers are watching TV shows such as "Peppa Pig", "Curious George", "Glee" and "Good Luck Charlie". If you're a kid or a teenager, then you're probably playing with toys such as the Xbox 360, the PlayStation 3 and the LeapPad Explorer.

If you are looking for some childhood nostalgia, then check out November 9th, 2018 instead.

Celebrities, historical figures and notable people who were born on the 9th of November.

Barack Obama was the President of the United States on November 9th, 2012.

David Cameron was the Prime Minister of the United Kingdom on November 9th, 2012.

Enter your date of birth below to find out how old you were on November 9th, 2012.

Here are some fun statistics about November 9th, 2012.

Have something to say about November 9th, 2012?