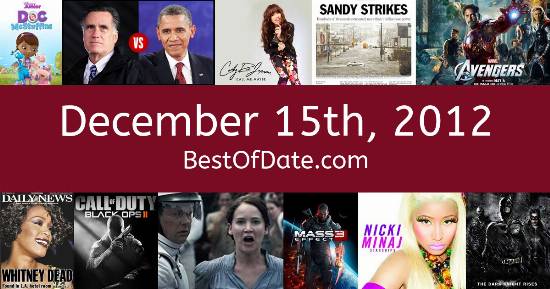 Songs that were on top of the music singles charts in the USA and the United Kingdom on December 15th, 2012.

The date is December 15th, 2012 and it's a Saturday. Anyone born today will have the star sign Sagittarius. Currently, people are enjoying their weekend.

The Christmas season of 2012 is in full swing. The decorations are up and festive songs are playing on the radio. In America, the song Diamonds by Rihanna is on top of the singles charts. Over in the UK, The Power Of Love by Gabrielle Aplin is the number one hit song.

Barack Obama is currently the President of the United States and the movie Skyfall is at the top of the Box Office. In the United Kingdom, David Cameron is the current Prime Minister. It's 2012, so the music charts are being dominated by artists such as Carly Rae Jepsen, Gotye, Flo Rida, LMFAO and Ellie Goulding.

Microsoft have released their new operating system "Windows 8". Nintendo have recently released their new video game console "the Wii U". This is the first Nintendo console to support HD graphics. A number of people are using an old Mayan calendar to predict that the end of the world will occur on Friday, the 21st of December, 2012. The prediction is receiving a lot of attention on social media.

James Arthur has just won the ninth season of "The X Factor". People are reacting in shock and anger at news that a mass shooting has occurred at the Sandy Hook Elementary School in Newtown, Connecticut. 20 children have lost their lives and the incident has reignited the debate about gun control in America. On TV, people are watching popular shows such as "Futurama", "Real Housewives of New York City", "White Collar" and "Black Mirror".

Meanwhile, gamers are playing titles such as "DayZ (mod)", "Mass Effect 3", "Halo 4" and "Call of Duty: Black Ops II". Kids and teenagers are watching TV shows such as "Peppa Pig", "Mickey Mouse Clubhouse", "Glee" and "Doc McStuffins". If you're a kid or a teenager, then you're probably playing with toys such as the Xbox 360, the PlayStation 3, the LeapPad Explorer and the Wii U.

Barack Obama was the President of the United States on December 15th, 2012.

David Cameron was the Prime Minister of the United Kingdom on December 15th, 2012.

Enter your date of birth below to find out how old you were on December 15th, 2012.

Here are some fun statistics about December 15th, 2012.

Leave a comment and tell everyone why December 15th, 2012 is important to you.