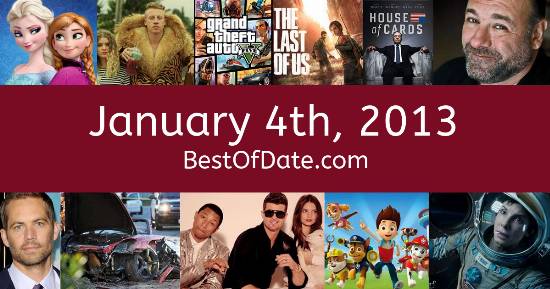 Songs that were on top of the music singles charts in the USA and the United Kingdom on January 4th, 2013.

The date is January 4th, 2013 and it's a Friday. Anyone born today will have the star sign Capricorn. Currently, people have "that Friday feeling" and are looking forward to the weekend.

People are starting to return back to work and school after the Christmas holidays. In America, the song Locked Out Of Heaven by Bruno Mars is on top of the singles charts. Over in the UK, Impossible by James Arthur is the number one hit song.

Barack Obama is currently the President of the United States and the movie Texas Chainsaw 3D is at the top of the Box Office. In the United Kingdom, David Cameron is the current Prime Minister. Video rental stores such as Blockbuster are continuing to close their doors at the moment. This is due to the increasing popularity of online streaming services such as Netflix and Hulu.

It's 2013, so the music charts are being dominated by artists such as Macklemore, Robin Thicke, Imagine Dragons and Bruno Mars. On TV, people are watching popular shows such as "Futurama", "Dora the Explorer", "Homeland" and "American Horror Story". Meanwhile, gamers are playing titles such as "Mass Effect 3", "Diablo III", "Halo 4" and "Call of Duty: Black Ops II".

Children and teenagers are currently watching television shows such as "LazyTown", "Glee", "Jessie" and "Dog with a Blog". If you're a kid or a teenager, then you're probably playing with toys such as the Xbox 360, the PlayStation 3 and the Wii U.

If you are looking for some childhood nostalgia, then check out January 4th, 2019 instead.

Barack Obama was the President of the United States on January 4th, 2013.

David Cameron was the Prime Minister of the United Kingdom on January 4th, 2013.

Enter your date of birth below to find out how old you were on January 4th, 2013.

Here are some fun statistics about January 4th, 2013.