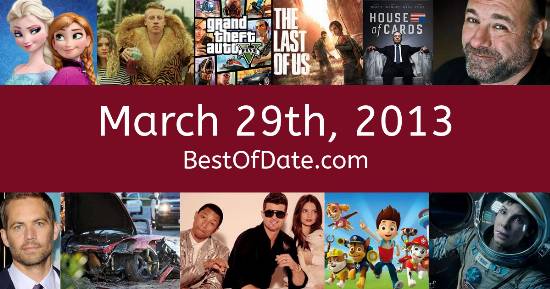 Songs that were on top of the music singles charts in the USA and the United Kingdom on March 29th, 2013.

The date is March 29th, 2013 and it's a Friday. Anyone born today will have the star sign Aries. Currently, people have "that Friday feeling" and are looking forward to the weekend.

Spring has arrived and the days have become longer. In America, the song Harlem Shake by Baauer is on top of the singles charts. Over in the UK, Let's Get Ready To Rhumble by PJ & Duncan is the number one hit song.

Barack Obama is currently the President of the United States and the movie G.I. Joe: Retaliation is at the top of the Box Office. In the United Kingdom, David Cameron is the current Prime Minister. Video rental stores such as Blockbuster are continuing to close their doors at the moment. This is due to the increasing popularity of online streaming services such as Netflix and Hulu.

It's 2013, so the music charts are being dominated by artists such as Macklemore, Robin Thicke, Imagine Dragons and Bruno Mars. A new song called "Blurred Lines" by Robin Thicke, Pharrell Williams and T.I. has recently been released. The European Union has agreed to give Cyprus a €10 billion economic bailout to help with its banking crisis.

If you're a kid or a teenager, then you're probably playing with toys such as the Xbox 360, the PlayStation 3 and the Wii U.

If you are looking for some childhood nostalgia, then check out March 29th, 2019 instead.

Barack Obama was the President of the United States on March 29th, 2013.

David Cameron was the Prime Minister of the United Kingdom on March 29th, 2013.

Enter your date of birth below to find out how old you were on March 29th, 2013.