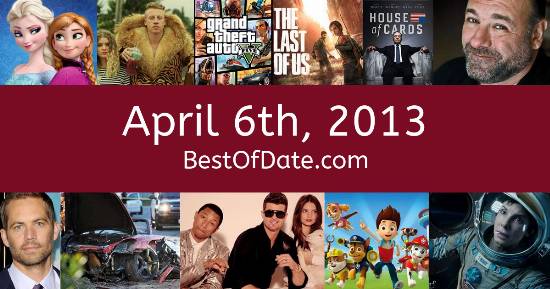 Songs that were on top of the music singles charts in the USA and the United Kingdom on April 6th, 2013:

The date is April 6th, 2013 and it's a Saturday. Anyone born today will have the star sign Aries. Currently, people are enjoying their weekend.

The summer of 2013 is drawing closer and temperatures have started to rise. In America, the song Thrift Shop by Macklemore & Ryan Lewis is on top of the singles charts. Over in the UK, Need U (100%) by Duke Dumont is the number one hit song.

Barack Obama is currently the President of the United States and the movie Evil Dead (2013) is at the top of the Box Office. In the United Kingdom, David Cameron is the current Prime Minister. It's 2013, so the music charts are being dominated by artists such as Macklemore, Robin Thicke, Imagine Dragons and Bruno Mars.

A new song called "Blurred Lines" by Robin Thicke, Pharrell Williams and T.I. has recently been released. A cryptocurrency called "Bitcoin" has just reached $100 for the first time. On TV, people are watching popular shows such as "How I Met Your Mother", "RuPaul's Drag Race", "Modern Family" and "Suits".

Meanwhile, gamers are playing titles such as "Sleeping Dogs", "Halo 4", "Dead Space 3" and "Aliens: Colonial Marines". Kids and teenagers are watching TV shows such as "Dora the Explorer", "Peppa Pig", "LazyTown" and "Curious George". If you're a kid or a teenager, then you're probably playing with toys such as "Xbox 360", "PlayStation 3" and "The Wii U".

Who was the Prime Minister of the United Kingdom on April 6th, 2013?

Enter your date of birth below to find out how old you were on April 6th, 2013.

Looking for some nostalgia? Here are some Youtube videos relating to April 6th, 2013. Please note that videos are automatically selected by Youtube and that results may vary! Click on the "Load Next Video" button to view the next video in the search playlist. In many cases, you'll find episodes of old TV shows, documentaries, music videos and soap dramas.

Here are some fun statistics about April 6th, 2013.