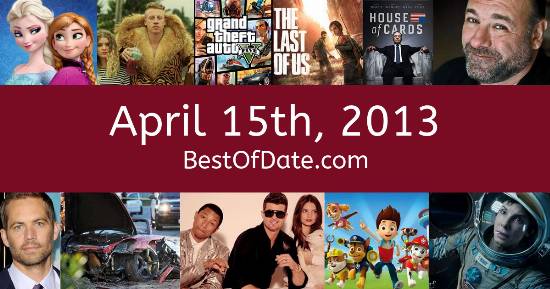 Songs that were on top of the music singles charts in the USA and the United Kingdom on April 15th, 2013:

The date is April 15th, 2013 and it's a Monday. Anyone born today will have the star sign Aries. The summer of 2013 is drawing closer and temperatures have started to rise.

In America, the song When I Was Your Man by Bruno Mars is on top of the singles charts. Over in the UK, Waiting All Night by Rudimental is the number one hit song. Barack Obama is currently the President of the United States and the movie 42 is at the top of the Box Office.

Former British Prime Minister Margaret Thatcher has passed away at the age of 87. Pop star Justin Bieber has drawn controversy following his comments that Anne Frank would have been "a Belieber." The world is currently in shock following the terrorist bombing at the annual Boston Marathon. Three people have been left dead by the blasts and several hundred have been injured. America's security agencies are currently working to identify the attackers.

On TV, people are watching popular shows such as "Community", "The Walking Dead", "Suits" and "House of Cards". Meanwhile, gamers are playing titles such as "Halo 4", "Dead Space 3", "Aliens: Colonial Marines" and "BioShock Infinite". Kids and teenagers are watching TV shows such as "Jessie", "Austin & Ally", "Lab Rats: Bionic Island" and "Doc McStuffins".

Who was the Prime Minister of the United Kingdom on April 15th, 2013?

Enter your date of birth below to find out how old you were on April 15th, 2013.

Looking for some nostalgia? Here are some Youtube videos relating to April 15th, 2013. Please note that videos are automatically selected by Youtube and that results may vary! Click on the "Load Next Video" button to view the next video in the search playlist. In many cases, you'll find episodes of old TV shows, documentaries, music videos and soap dramas.