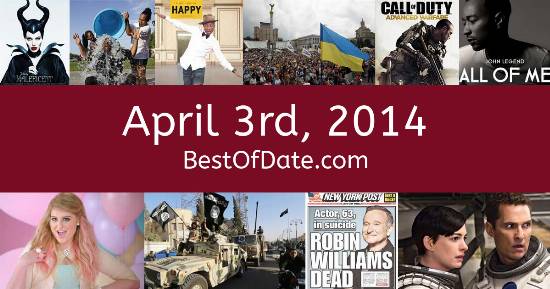 Songs that were on top of the music singles charts in the USA and the United Kingdom on April 3rd, 2014.

The date is April 3rd, 2014 and it's a Thursday. Anyone born today will have the star sign Aries. The summer of 2014 is drawing closer and temperatures have started to rise.

In America, the song Happy by Pharrell Williams is on top of the singles charts. Over in the UK, I Got U by Duke Dumont featuring Jax Jones is the number one hit song. Barack Obama is currently the President of the United States and the movie Noah is at the top of the Box Office.

It is 2014, so the music charts are being dominated by artists such as Pharrell Williams, Katy Perry, John Legend, Iggy Azalea, Meghan Trainor, Lorde and Jason Derulo. A new Internet slang phrase called "Sliding into your DMs" is becoming popular at the moment. On TV, people are watching popular shows such as "Community", "Modern Family", "Peaky Blinders" and "Rick and Morty".

Meanwhile, gamers are playing titles such as "Dota 2", "Grand Theft Auto V", "Batman: Arkham Origins" and "Call of Duty: Ghosts". Children and teenagers are currently watching television shows such as "The Fairly OddParents", "Team Umizoomi", "Jake and the Never Land Pirates" and "Doc McStuffins". If you're a kid or a teenager, then you're probably playing with toys such as the Wii U, the PlayStation 4, the Xbox One and Frozen dolls.

If you are looking for some childhood nostalgia, then check out April 3rd, 2020 instead.

Celebrities, historical figures and notable people who were born on the 3rd of April.

Barack Obama was the President of the United States on April 3rd, 2014.

David Cameron was the Prime Minister of the United Kingdom on April 3rd, 2014.

Enter your date of birth below to find out how old you were on April 3rd, 2014.

Here are some fun statistics about April 3rd, 2014.