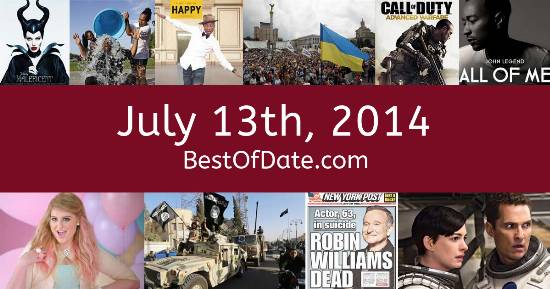 Songs that were on top of the music singles charts in the USA and the United Kingdom on July 13th, 2014:

The date is July 13th, 2014 and it's a Sunday. Anyone born today will have the star sign Cancer. Currently, people are enjoying their weekend.

It's summer, so the temperatures are warmer and the evenings are longer than usual. In America, the song Fancy by Iggy Azalea featuring Charli XCX is on top of the singles charts. Over in the UK, Problem by Ariana Grande featuring Iggy Azalea is the number one hit song.

Barack Obama is currently the President of the United States and the movie Transformers 4 is at the top of the Box Office. In the United Kingdom, David Cameron is the current Prime Minister. A social networking website called Vine is extremely popular at the moment.

It is 2014, so the music charts are being dominated by artists such as Pharrell Williams, Katy Perry, John Legend, Iggy Azalea, Meghan Trainor, Lorde and Jason Derulo. An activity called the "Ice Bucket Challenge" is currently going viral on social media at the moment. The activity, which is being done to promote awareness of ALS, involves someone having a bucket of ice water dumped over their head. The 2014 FIFA World Cup in Brazil is coming to a close. The final between Germany and Argentina will be taking place today.

People are watching popular TV shows such as "The Vampire Diaries", "Modern Family", "White Collar" and "The Walking Dead". Meanwhile, gamers are playing titles such as "ARMA 3", "Assassin's Creed IV: Black Flag", "Titanfall" and "Watchdogs". Children and teenagers are currently watching television shows such as "Dora the Explorer", "LazyTown", "Jessie" and "Sam & Cat".

Celebrities and historical figures that were born on the 13th of July:

Who was the Prime Minister of the United Kingdom on July 13th, 2014?

Looking for some nostalgia? Here are some Youtube videos relating to July 13th, 2014. Please note that videos are automatically selected by Youtube and that results may vary! Click on the "Load Next Video" button to view the next video in the search playlist. In many cases, you'll find episodes of old TV shows, documentaries, music videos and soap dramas.