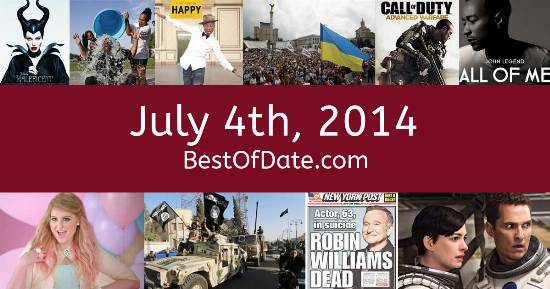 Songs that were on top of the music singles charts in the USA and the United Kingdom on July 4th, 2014:

The date is July 4th, 2014 and it's a Friday. Anyone born today will have the star sign Cancer. Currently, people have "that Friday feeling" and are looking forward to the weekend.

America is celebrating the 4th of July, which means that fireworks are being set off and families are holding barbeques together. It's summer, so the temperatures are warmer and the evenings are longer than usual. In America, the song Fancy by Iggy Azalea featuring Charli XCX is on top of the singles charts.

Over in the UK, Ghost by Ella Henderson is the number one hit song. Barack Obama is currently the President of the United States and the movie Transformers 4 is at the top of the Box Office. In the United Kingdom, David Cameron is the current Prime Minister.

A social networking website called Vine is extremely popular at the moment. It is 2014, so the music charts are being dominated by artists such as Pharrell Williams, Katy Perry, John Legend, Iggy Azalea, Meghan Trainor, Lorde and Jason Derulo. The 2014 FIFA World Cup is currently taking place in Brazil.

North Korea is threatening "countermeasures" if Sony proceeds to release the movie The Interview. An activity called the "Ice Bucket Challenge" is currently going viral on social media at the moment. The activity, which is being done to promote awareness of ALS, involves someone having a bucket of ice water dumped over their head. Australian entertainer Rolf Harris has been sentenced to five years and nine months in prison for indecent assault.

Who was the Prime Minister of the United Kingdom on July 4th, 2014?

Enter your date of birth below to find out how old you were on July 4th, 2014.

Looking for some nostalgia? Here are some Youtube videos relating to July 4th, 2014. Please note that videos are automatically selected by Youtube and that results may vary! Click on the "Load Next Video" button to view the next video in the search playlist. In many cases, you'll find episodes of old TV shows, documentaries, music videos and soap dramas.

Here are some fun statistics about July 4th, 2014.