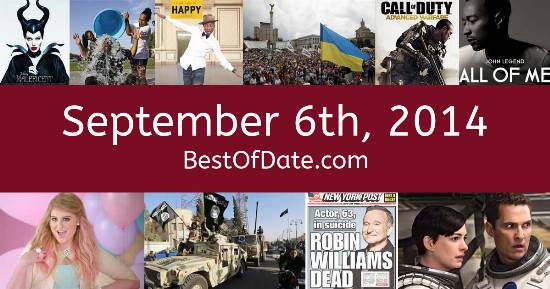 These songs were on top of the music charts in the United States and the United Kingdom on September 6th, 2014.

The movie "Guardians of the Galaxy" was at the top of the Box Office on September 6th, 2014.

The date is September 6th, 2014, and it's a Saturday. Anyone born today will have the star sign Virgo. Currently, people are enjoying their weekend.

Schools and colleges are starting again and Autumn has officially arrived. As a result, temperatures are beginning to cool and trees are starting to shed their leaves. In America, the song Shake It Off by Taylor Swift is on top of the singles charts. Over in the UK, Prayer in C by Lilly Wood and Robin Schulz is the number one hit song.

Barack Obama is currently the President of the United States, and the movie Guardians of the Galaxy is at the top of the Box Office. In the United Kingdom, David Cameron is the current Prime Minister. Video rental stores such as Blockbuster are continuing to close their doors at the moment. This is due to the increasing popularity of online streaming services such as Netflix and Hulu.

Hundreds of hacked naked pictures of famous celebrities have just been leaked on the Internet. Commentators are labeling this event "Celebgate" and "The Fappening". Tributes are pouring in for actress Joan Rivers, who has unexpectedly passed away after suffering complications from a minor throat surgery. The music world is in shock following news that G.R.L. singer Simone Battle has committed suicide at the age of 25.

If you were to travel back to this day, notable figures such as Ian Paisley, Diem Brown, Junior Malanda and Greg Plitt would all be still alive. On TV, people are watching popular shows such as "Two and a Half Men", "Boardwalk Empire", "Once Upon a Time" and "Black Mirror". Meanwhile, gamers are playing titles such as "Clash of Clans", "Battlefield 4", "Assassin's Creed IV: Black Flag" and "Call of Duty: Ghosts".

Children and teenagers are currently watching television shows such as "Jake and the Never Land Pirates", "Paw Patrol", "The Thundermans" and "Sheriff Callie's Wild West". If you're a kid or a teenager, then you're probably playing with toys such as the Wii U, the Furby Boom, the Xbox One and Frozen dolls.

These are trending news stories and fads that were prevalent at this time. These are topics that would have been in the media on September 6th, 2014.

Check out our personality summary for people who were born on September 6th, 2014.

If you are looking for some childhood nostalgia, then you should check out September 6th, 2020 instead.

Barack Obama was the President of the United States on September 6th, 2014.

David Cameron was the Prime Minister of the United Kingdom on September 6th, 2014.

Enter your date of birth below to find out how old you were on September 6th, 2014.
This information is not transmitted to our server.

Here are some fun statistics about September 6th, 2014.