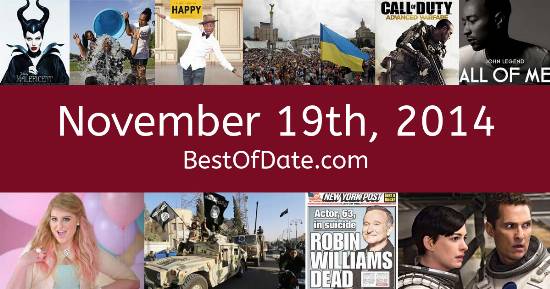 Songs that were on top of the music singles charts in the USA and the United Kingdom on November 19th, 2014:

The date is November 19th, 2014 and it's a Wednesday. Anyone born today will have the star sign Scorpio. It's November, so the evenings are getting darker and the days are getting colder.

In America, the song Shake It Off by Taylor Swift is on top of the singles charts. Over in the UK, I Don't Care by Cheryl is the number one hit song. Barack Obama is currently the President of the United States and the movie Dumb and Dumber To is at the top of the Box Office.

A video of stand-up comedian Hannibal Buress calling actor Bill Cosby a rapist has caught the nation's attention. Coverage of the allegations are beginning to intensify. The FPS game "Call of Duty: Advanced Warfare" has been released. In technology news, a new virtual assistant AI called "Amazon Alexa" has just been released. The device allows people to interact with it via voice commands.

Reality TV star Diem Brown has died from ovarian cancer at the age of 34. On TV, people are watching popular shows such as "Bones", "Community", "Homeland" and "Black Mirror". Meanwhile, gamers are playing titles such as "Saints Row IV", "Watchdogs", "Alien: Isolation" and "Assassin's Creed: Unity".

Children and teenagers are currently watching television shows such as "Dora the Explorer", "Mickey Mouse Clubhouse", "Girl Meets World" and "Nicky, Ricky, Dicky & Dawn". Popular toys include the likes of "The Wii U", "PlayStation 4", "Xbox One" and "Frozen dolls".

Celebrities, historical figures and noteable people who were born on the 19th of November:

Who was the Prime Minister of the United Kingdom on November 19th, 2014?

Enter your date of birth below to find out how old you were on November 19th, 2014.

Looking for some nostalgia? Here are some Youtube videos relating to November 19th, 2014. Please note that videos are automatically selected by Youtube and that results may vary! Click on the "Load Next Video" button to view the next video in the search playlist. In many cases, you'll find episodes of old TV shows, documentaries, music videos and soap dramas.

Here are some fun statistics about November 19th, 2014.