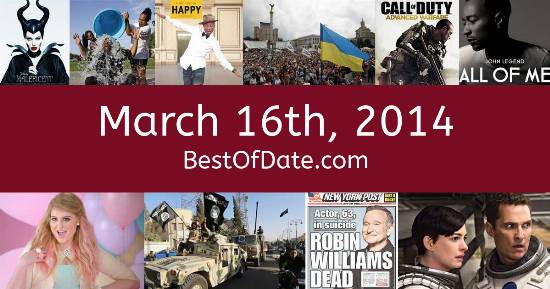 Songs that were on top of the music singles charts in the USA and the United Kingdom on March 16th, 2014.

The date is March 16th, 2014 and it's a Sunday. Anyone born today will have the star sign Pisces. Currently, people are enjoying their weekend.

Spring has started to creep in and the days are beginning to get longer. St. Patrick's Day is just around the corner. In America, the song Happy by Pharrell Williams is on top of the singles charts.

Over in the UK, My Love by Route 94 featuring Jess Glynne is the number one hit song. Barack Obama is currently the President of the United States and the movie Mr. Peabody & Sherman is at the top of the Box Office. In the United Kingdom, David Cameron is the current Prime Minister.

A new Internet slang phrase called "Sliding into your DMs" is becoming popular at the moment. Malaysia Airlines Flight 370 recently disappeared from radar and there has been zero trace of the missing aircraft despite a widespread search. If you were to travel back to this day, notable figures such as Peaches Geldof, The Ultimate Warrior, Robin Williams and Richard Attenborough would all be still alive.

On TV, people are watching popular shows such as "Mad Men", "The Vampire Diaries", "Game of Thrones" and "Suits". Meanwhile, gamers are playing titles such as "Clash of Clans", "BioShock Infinite", "Dead Rising 3" and "Hearthstone: Heroes of Warcraft". Children and teenagers are currently watching television shows such as "Dora the Explorer", "Mickey Mouse Clubhouse", "Team Umizoomi" and "Doc McStuffins".

If you are looking for some childhood nostalgia, then check out March 16th, 2020 instead.

Barack Obama was the President of the United States on March 16th, 2014.

David Cameron was the Prime Minister of the United Kingdom on March 16th, 2014.

Enter your date of birth below to find out how old you were on March 16th, 2014.