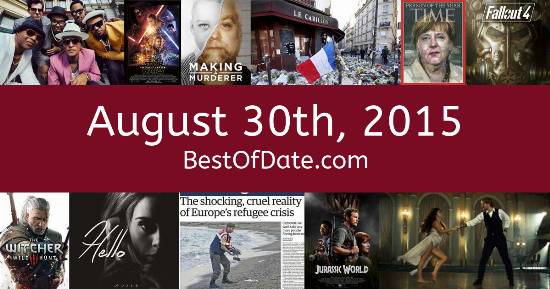 Songs that were on top of the music singles charts in the USA and the United Kingdom on August 30th, 2015.

The movie "Straight Outta Compton" was at the top of the box office on August 30th, 2015.

The date is August 30th, 2015 and it's a Sunday. Anyone born today will have the star sign Virgo. Currently, people are enjoying their weekend.

The summer of 2015 is coming to an end and fall is just around the corner. In America, the song Cheerleader by OMI is on top of the singles charts. Over in the UK, Don't Be So Hard on Yourself by Jess Glynne is the number one hit song.

It's 2015, so the music charts are being dominated by the likes of OMI, Bruno Mars, Ellie Goulding, Adele, Justin Bieber and Hozier. Following the release of the movie "Straight Outta Compton", people on the Internet are currently sharing parody images that use the name of their own hometown instead of Compton. On Netflix, the first season of Narcos has been released.

Rapper Nicki Minaj has sparked controversy after calling out Miley Cryus at the 2015 MTV Video Music Awards. The outburst leads to "Miley, what's good?!" becoming a popular catchphrase. On TV, people are watching popular shows such as "Bones", "The Vampire Diaries", "Orange Is the New Black" and "Peaky Blinders". Meanwhile, gamers are playing titles such as "Alien: Isolation", "Assassin's Creed: Unity", "The Witcher 3: Wild Hunt" and "Batman: Arkham Knight".

Children and teenagers are currently watching television shows such as "Dora the Explorer", "The Fairly OddParents", "Austin & Ally" and "Doc McStuffins". If you're a kid or a teenager, then you're probably playing with toys such as the PlayStation 4 and the Xbox One.

Celebrities, historical figures and notable people who were born on the 30th of August.

Barack Obama was the President of the United States on August 30th, 2015.

David Cameron was the Prime Minister of the United Kingdom on August 30th, 2015.

Enter your date of birth below to find out how old you were on August 30th, 2015.