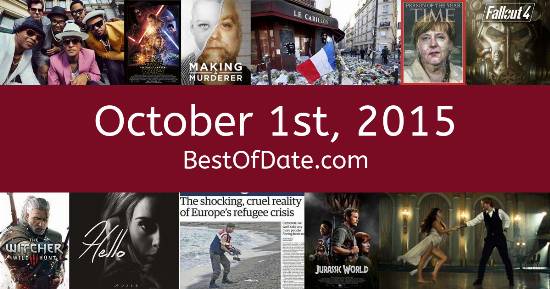 Songs that were on top of the music singles charts in the USA and the United Kingdom on October 1st, 2015.

The movie "Hotel Transylvania 2" was at the top of the box office on October 1st, 2015.

The date is October 1st, 2015 and it's a Thursday. Anyone born today will have the star sign Libra. The summer is long gone. Temperatures have started to become much cooler and the evenings are beginning to get darker.

Fallen leaves have carpeted driveways, lawns, pathways and sidewalks and there's a fresh earthy scent in the ear. In America, the song Can't Feel My Face by The Weeknd is on top of the singles charts. Over in the UK, What Do You Mean? by Justin Bieber is the number one hit song.

Barack Obama is currently the President of the United States and the movie Hotel Transylvania 2 is at the top of the Box Office. In the United Kingdom, David Cameron is the current Prime Minister. A social networking website called Vine is extremely popular at the moment.

It's 2015, so the music charts are being dominated by the likes of OMI, Bruno Mars, Ellie Goulding, Adele, Justin Bieber and Hozier. The 2015 Rugby World Cup is currently taking place in England. NASA has recently announced that liquid water has been found on the planet Mars.

Kids and teenagers are watching TV shows such as "The Fairly OddParents", "Doc McStuffins", "Sheriff Callie's Wild West" and "Nicky, Ricky, Dicky & Dawn". Popular toys at the moment include the likes of the Furby Boom, the PlayStation 4, the Xbox One and Star Wars BB-8 toy droid.

Barack Obama was the President of the United States on October 1st, 2015.

David Cameron was the Prime Minister of the United Kingdom on October 1st, 2015.

Enter your date of birth below to find out how old you were on October 1st, 2015.

Here are some fun statistics about October 1st, 2015.