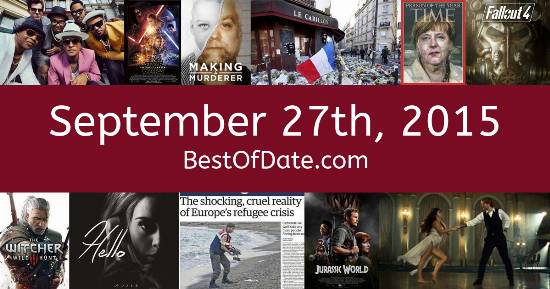 On September 27th, 2015, the following songs were at the top of the music charts in the USA and the UK.

Play the top singles from the year 2015.
A Spotify playlist of hit songs from 2015. Take a trip back to the peak days of Mark Ronson, Ed Sheeran, Justin Bieber, Major Lazer and Ellie Goulding.

The top "Box Office" movie on this date was the film "Hotel Transylvania 2".

The date is September 27th, 2015, and it's a Sunday. Anyone born today will have the star sign Libra. Currently, people are enjoying their weekend.

Schools and colleges are starting again and Autumn has officially arrived. As a result, temperatures are beginning to cool and trees are starting to shed their leaves. The earthy smells of fall have started to fill the air. In America, the song Can't Feel My Face by The Weeknd is on top of the singles charts.

Over in the UK, What Do You Mean? by Justin Bieber is the number one hit song. Barack Obama is currently the President of the United States, and the movie Hotel Transylvania 2 is at the top of the Box Office. In the United Kingdom, David Cameron is the current Prime Minister.

A social networking website called Vine is extremely popular at the moment. It's 2015, so the music charts are being dominated by the likes of OMI, Bruno Mars, Ellie Goulding, Adele, Justin Bieber and Hozier. Singer Lukas Graham has just released his new song "7 Years".

The 2015 Rugby World Cup is currently taking place in England. A stampede during the annual Hajj pilgrimage in Saudi Arabia has led to the loss of 1,100 lives. If you were to travel back to this day, notable figures such as Jonah Lomu, Lemmy, David Bowie and Angela Raiola would all be still alive.

If you're a kid or a teenager, then you're probably playing with toys such as the Furby Boom, the Xbox One, Frozen toys and Barbie Saddle n Ride.

These are trending news stories and fads that were prevalent at this time. These are topics that would have been in the media on September 27th, 2015.

News stories and other events that happened around September 27th, 2015.

Check out our personality summary for people who were born on September 27th, 2015.

Television shows that people were watching in September, 2015.

Popular video games that people were playing in September of 2015.

If you are looking for some childhood nostalgia, then you should check out September 27th, 2021 instead.

Barack Obama was the President of the United States on September 27th, 2015.

David Cameron was the Prime Minister of the United Kingdom on September 27th, 2015.

Find out what your age was on September 27th, 2015, by entering your DOB below.
This information is not saved on our server.

Here are some fun statistics about September 27th, 2015.