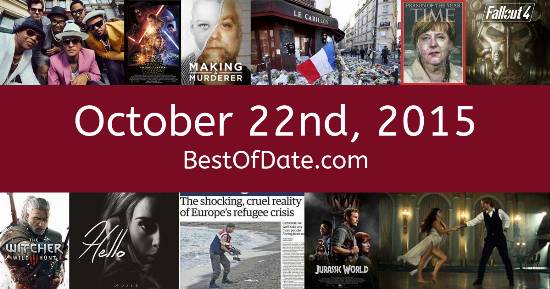 Songs that were on top of the music singles charts in the USA and the United Kingdom on October 22nd, 2015.

The date is October 22nd, 2015 and it's a Thursday. Anyone born today will have the star sign Libra. The summer is long gone. Temperatures have started to become much cooler and the evenings are beginning to get darker.

Fallen leaves have carpeted driveways, lawns, pathways and sidewalks and there's a fresh earthy scent in the ear. Halloween of 2015 is quickly approaching and stores are selling costumes and decorations. In America, the song The Hills by The Weeknd is on top of the singles charts.

Over in the UK, What Do You Mean? by Justin Bieber is the number one hit song. Barack Obama is currently the President of the United States and the movie Goosebumps is at the top of the Box Office. In the United Kingdom, David Cameron is the current Prime Minister.

The Internet slang phrase "Netflix and chill" is becoming more and more popular. NBA player Lamar Odom has been placed on life support after suffering kidney failure and several heart attacks due to cocaine use. It has been announced that Dutch soccer legend Johan Cruyff is suffering from lung cancer.

If you were to travel back to this day, notable figures such as Jonah Lomu, Lemmy, David Bowie and Angela Raiola would all be still alive. On TV, people are watching popular shows such as "Prison Break", "RuPaul's Drag Race", "The Vampire Diaries" and "Peaky Blinders". Meanwhile, gamers are playing titles such as "Far Cry 4", "Cities: Skylines", "Lego Jurassic World" and "Call of Duty: Black Ops III".

Children and teenagers are currently watching television shows such as "WordGirl", "Sheriff Callie's Wild West", "Nicky, Ricky, Dicky & Dawn" and "Game Shakers". If you're a kid or a teenager, then you're probably playing with toys such as Rainbow Loom, the Furby Boom, the PlayStation 4 and Frozen toys.

NBA player. Deceased
Born on October 22nd, 1964
He was not alive on this date.

Barack Obama was the President of the United States on October 22nd, 2015.

David Cameron was the Prime Minister of the United Kingdom on October 22nd, 2015.

Enter your date of birth below to find out how old you were on October 22nd, 2015.

Here are some fun statistics about October 22nd, 2015.