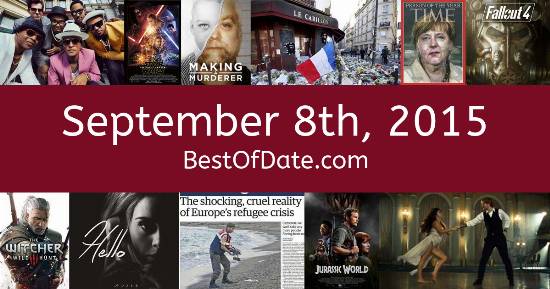 These songs were on top of the music charts in the United States and the United Kingdom on September 8th, 2015.

The date is September 8th, 2015, and it's a Tuesday. Anyone born today will have the star sign Virgo. Schools and colleges are starting again and Autumn has officially arrived. As a result, temperatures are beginning to cool and trees are starting to shed their leaves.

In the United States, Labor Day of 2015 has recently come and passed. To many, this means that the summer is officially over. In America, the song Cheerleader by OMI is on top of the singles charts. Over in the UK, Fight Song by Rachel Platten is the number one hit song.

Barack Obama is currently the President of the United States, and the movie War Room is at the top of the Box Office. In the United Kingdom, David Cameron is the current Prime Minister. A social networking website called Vine is extremely popular at the moment.

It's 2015, so the music charts are being dominated by the likes of OMI, Bruno Mars, Ellie Goulding, Adele, Justin Bieber and Hozier. The game "Metal Gear Solid V: The Phantom Pain" has just been released. International concern over the refugee crisis that is gripping the Middle East and Europe has taken a dramatic upturn after photographs emerge of a three-year-old Syrian boy called Alan Kurdi lying dead on a beach.

Former NFL player Tyler Sash has been found dead at his home. If you were to travel back to this day, notable figures such as Jonah Lomu, Lemmy, David Bowie and Angela Raiola would all be still alive. On TV, people are watching popular shows such as "American Horror Story", "Black-ish", "Jane the Virgin" and "Narcos - Season 1".

Meanwhile, gamers are playing titles such as "Destiny", "Call of Duty: Advanced Warfare", "Assassin's Creed: Unity" and "Total War: Attila". Children and teenagers are currently watching television shows such as "Lab Rats: Bionic Island", "Doc McStuffins", "Agents of S.H.I.E.L.D." and "The Thundermans". If you're a kid or a teenager, then you're probably playing with toys such as the Xbox One, Frozen toys, Barbie Saddle n Ride and Star Wars BB-8 toy droid.

These are trending news stories and fads that were prevalent at this time. These are topics that would have been in the media on September 8th, 2015.

Check out our personality summary for people who were born on September 8th, 2015.

Television shows that people were watching in September, 2015.

Popular video games that people were playing in September of 2015.

If you are looking for some childhood nostalgia, then you should check out September 8th, 2021 instead.

Soccer manager. Deceased
Born on September 8th, 1969
He was not alive on this date.

Barack Obama was the President of the United States on September 8th, 2015.

David Cameron was the Prime Minister of the United Kingdom on September 8th, 2015.

Enter your date of birth below to find out how old you were on September 8th, 2015.
This information is not transmitted to our server.

Here are some fun statistics about September 8th, 2015.