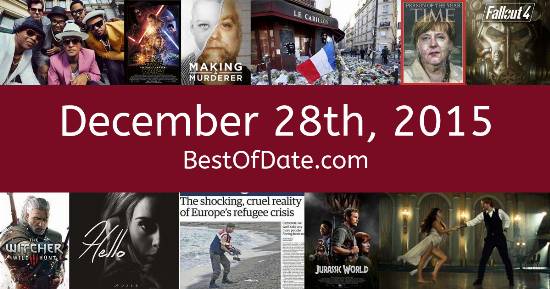 Songs that were on top of the music singles charts in the USA and the United Kingdom on December 28th, 2015:

The date is December 28th, 2015 and it's a Monday. Anyone born today will have the star sign Capricorn. Christmas Day of 2015 has just passed and many people are relaxing at home and enjoying the holiday season.

Meanwhile, a gesture called "the Dab" is beginning to take off in popularity. Sports stars in particular are starting to incorporate the move into their celebrations. The first season of "Making a Murderer" has recently been released on Netflix and people are currently debating whether Steven Avery is innocent or not. Some people are creating petitions and demanding that Avery be released. FIFA's ethics committee has banned Sepp Blatter and Michel Platini from football for eight years after they were both found guilty of conflict of interest and dereliction of duty. Meanwhile, Irish winger Damien Duff has just announced his retirement.

Tributes are pouring in for English musician Ian Fraser "Lemmy" Kilmister, who has passed away after a short battle with cancer. People are watching popular TV shows such as "RuPaul's Drag Race", "Power", "Jane the Virgin" and "Making a Murderer". Meanwhile, gamers are playing titles such as "Batman: Arkham Knight", "Assassin's Creed Syndicate", "Fallout 4" and "Just Cause 3".

Children and teenagers are currently watching television shows such as "Jake and the Never Land Pirates", "Austin & Ally", "Sheriff Callie's Wild West" and "Henry Danger". Popular toys include the likes of "PlayStation 4", "Xbox One" and "Star Wars BB-8 toy droid".

Celebrities and historical figures that were born on the 28th of December:

Who was the Prime Minister of the United Kingdom on December 28th, 2015?

Enter your date of birth below to find out how old you were on December 28th, 2015.

Looking for some nostalgia? Here are some Youtube videos relating to December 28th, 2015. Please note that videos are automatically selected by Youtube and that results may vary! Click on the "Load Next Video" button to view the next video in the search playlist. In many cases, you'll find episodes of old TV shows, documentaries, music videos and soap dramas.

Here are some fun statistics about December 28th, 2015.