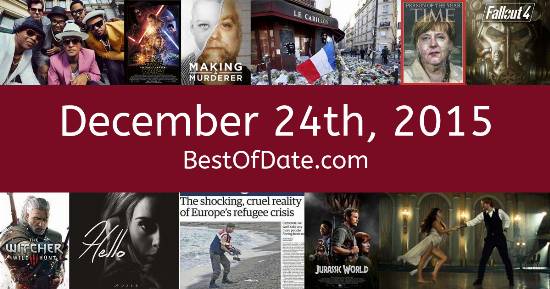 Songs that were on top of the music singles charts in the USA and the United Kingdom on December 24th, 2015.

The movie "Star Wars: The Force Awakens" was at the top of the box office on December 24th, 2015.

The date is December 24th, 2015 and it's a Thursday. Anyone born today will have the star sign Capricorn. It's Christmas Eve of 2015. The big day is fast approaching and the excitement is building. Department stores are thronged with people who are trying to do some last-minute shopping.

Meanwhile, a gesture called "the Dab" is beginning to take off in popularity. Sports stars in particular are starting to incorporate the move into their celebrations. The first season of "Making a Murderer" has recently been released on Netflix and people are currently debating whether Steven Avery is innocent or not. Some people are creating petitions and demanding that Avery be released. FIFA's ethics committee has banned Sepp Blatter and Michel Platini from football for eight years after they were both found guilty of conflict of interest and dereliction of duty. Meanwhile, Irish winger Damien Duff has just announced his retirement.

Celebrities, historical figures and notable people who were born on the 24th of December.

Barack Obama was the President of the United States on December 24th, 2015.

David Cameron was the Prime Minister of the United Kingdom on December 24th, 2015.

Enter your date of birth below to find out how old you were on December 24th, 2015.

Here are some fun statistics about December 24th, 2015.

Leave a comment and tell everyone why December 24th, 2015 is important to you.