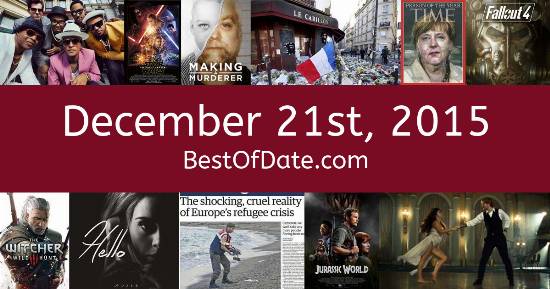 Songs that were on top of the music singles charts in the USA and the United Kingdom on December 21st, 2015:

The date is December 21st, 2015 and it's a Monday. Anyone born today will have the star sign Sagittarius. Christmas Day of 2015 is fast approaching and the excitement is building. Department stores are thronged with Christmas shoppers.

Meanwhile, a gesture called "the Dab" is beginning to take off in popularity. Sports stars in particular are starting to incorporate the move into their celebrations. Jordan Smith has just won the ninth season of The Voice. In soccer, Chelsea have decided to sack manager Jose Mourinho for the second time. Mourinho's sacking has come after an extremely poor start to the season, which has left Chelsea in 16th place.

The first season of "Making a Murderer" has recently been released on Netflix and people are currently debating whether Steven Avery is innocent or not. Some people are creating petitions and demanding that Avery be released. FIFA's ethics committee has banned Sepp Blatter and Michel Platini from football for eight years after they were both found guilty of conflict of interest and dereliction of duty. Meanwhile, Irish winger Damien Duff has just announced his retirement. People are watching popular TV shows such as "Modern Family", "Peaky Blinders", "Better Call Saul" and "Making a Murderer".

Meanwhile, gamers are playing titles such as "Metal Gear Solid V: The Phantom Pain", "Assassin's Creed Syndicate", "Halo 5: Guardians" and "Fallout 4". Kids and teenagers are watching TV shows such as "Austin & Ally", "Doc McStuffins", "Henry Danger" and "Nicky, Ricky, Dicky & Dawn". If you're a kid or a teenager, then you're probably playing with toys such as "PlayStation 4", "Xbox One" and "Star Wars BB-8 toy droid".

Who was the Prime Minister of the United Kingdom on December 21st, 2015?

Enter your date of birth below to find out how old you were on December 21st, 2015.

Looking for some nostalgia? Here are some Youtube videos relating to December 21st, 2015. Please note that videos are automatically selected by Youtube and that results may vary! Click on the "Load Next Video" button to view the next video in the search playlist. In many cases, you'll find episodes of old TV shows, documentaries, music videos and soap dramas.

Here are some fun statistics about December 21st, 2015.