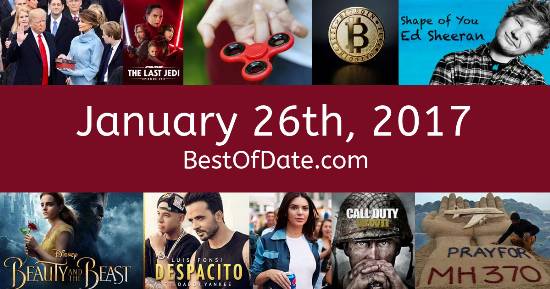 Songs that were on top of the music singles charts in the USA and the United Kingdom on January 26th, 2017:

The date is January 26th, 2017 and it's a Thursday. Anyone born today will have the star sign Aquarius. In America, the song Bad and Boujee by Migos featuring Lil Uzi Vert is on top of the singles charts.

Over in the UK, Shape of You by Ed Sheeran is the number one hit song. Donald Trump is currently the President of the United States and the movie Split is at the top of the Box Office. In the United Kingdom, Theresa May is the current Prime Minister.

It's 2017, so the music charts are being dominated by artists such as Ed Sheeran, Luis Fonsi, Bruno Mars, Kendrick Lamar, The Chainsmokers, Migos, Sam Hunt and Post Malone. "Salt Bae" memes are currently going viral on the Internet. Donald Trump has just been inaugurated as the 45th President of the United States.

On TV, people are watching popular shows such as "Bones", "The Vampire Diaries", "Suits" and "Homeland". Meanwhile, gamers are playing titles such as "Tom Clancy's The Division", "Civilization VI", "Dead Rising 4" and "Resident Evil 7: Biohazard". Children and teenagers are currently watching television shows such as "Dora the Explorer", "The Fairly OddParents", "Sheriff Callie's Wild West" and "Henry Danger".

If you're a kid or a teenager, then you're probably playing with toys such as "PlayStation 4", "Xbox One" and "Hatchimals".

Who was the Prime Minister of the United Kingdom on January 26th, 2017?

Enter your date of birth below to find out how old you were on January 26th, 2017.

Looking for some nostalgia? Here are some Youtube videos relating to January 26th, 2017. Please note that videos are automatically selected by Youtube and that results may vary! Click on the "Load Next Video" button to view the next video in the search playlist. In many cases, you'll find episodes of old TV shows, documentaries, music videos and soap dramas.

Here are some fun statistics about January 26th, 2017.