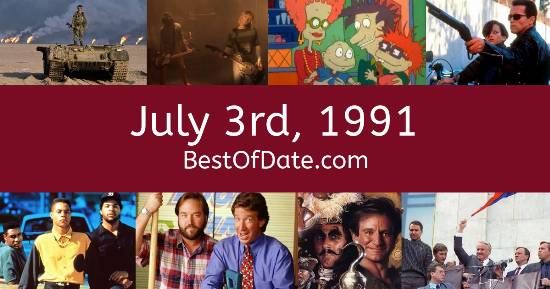 Songs that were on top of the music singles charts in the USA and the United Kingdom on July 3rd, 1991.

The date is July 3rd, 1991, and it's a Wednesday. Anyone born today will have the star sign Cancer. In America, the July 4th celebrations are fast approaching.

In Europe, the Soviet Union is continuing to dissolve as a defense pact between the USSR and several other Eastern Bloc is disbanded. The country of Yugoslavia is dissolving following the decision of Croatia and Serbia to declare their independence. Fighting has also broken out between the Yugoslav army and pro-independence secessionists in Slovenia. A Guns N' Roses concert in St. Louis has ended in a riot after lead singer Axl Rose attempted to confiscate a fan's video camera and then stormed off stage.

The film "Terminator 2: Judgment Day" has just been released in movie theaters. If you were to travel back to this day, notable figures such as Miles Davis, Freddie Mercury, Robert Reed and Anthony Perkins would all be still alive. On TV, people are watching popular shows such as "Last of the Summer Wine", "Knots Landing", "Matlock" and "Quantum Leap".

Meanwhile, gamers are playing titles such as "Duck Hunt", "SimCity", "Wing Commander" and "Castle of Illusion Starring Mickey Mouse". Children and teenagers are currently watching television shows such as "Mister Rogers' Neighborhood", "The Care Bears", "Dink, the Little Dinosaur" and "In Living Color". Popular toys at the moment include the likes of the Easy-Bake Oven, Mr Frosty, the Nintendo Entertainment System and Polly Pocket.

These are trending news stories and fads that were prevalent at this time. These are topics that would have been in the media on July 3rd, 1991.

News stories and other events that happened around July 3rd, 1991.

Check out our personality summary for people who were born on July 3rd, 1991.

If you are looking for some childhood nostalgia, then you should check out July 3rd, 1997 instead.

George W. Bush Snr. was the President of the United States on July 3rd, 1991.

John Major was the Prime Minister of the United Kingdom on July 3rd, 1991.

Find out what your age was on July 3rd, 1991, by entering your DOB below.
This information is not saved on our server.

Here are some fun statistics about July 3rd, 1991.