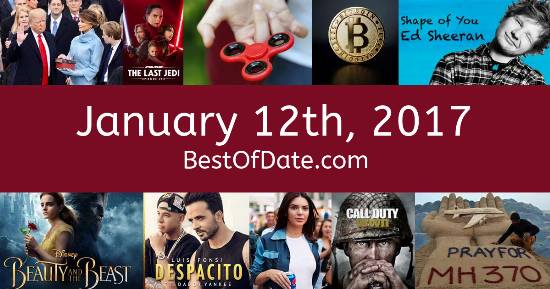 Songs that were on top of the music singles charts in the USA and the United Kingdom on January 12th, 2017.

The date is January 12th, 2017 and it's a Thursday. Anyone born today will have the star sign Capricorn. The Christmas holiday season is long over, the decorations have been taken down and a sense of normality has returned.

In America, the song Starboy by The Weeknd is on top of the singles charts. Over in the UK, Rockabye by Clean Bandit featuring Sean Paul is the number one hit song. Barack Obama is currently the President of the United States and the movie Hidden Figures is at the top of the Box Office.

If you were to travel back to this day, notable figures such as John Hurt, Bill Paxton, Chuck Berry and Big Black would all be still alive. On TV, people are watching popular shows such as "Once Upon a Time", "Orange Is the New Black", "Peaky Blinders" and "Rick and Morty". Meanwhile, gamers are playing titles such as "Doom", "PlayerUnknown's Battlegrounds", "Mafia III" and "Final Fantasy XV".

Kids and teenagers are watching TV shows such as "Dora the Explorer", "The Thundermans", "Bunnicula" and "The Loud House". If you're a kid or a teenager, then you're probably playing with toys such as the PlayStation 4, the Xbox One, L.O.L. Surprise! and Hatchimals.

Barack Obama was the President of the United States on January 12th, 2017.

Theresa May was the Prime Minister of the United Kingdom on January 12th, 2017.

Enter your date of birth below to find out how old you were on January 12th, 2017.

Here are some fun statistics about January 12th, 2017.