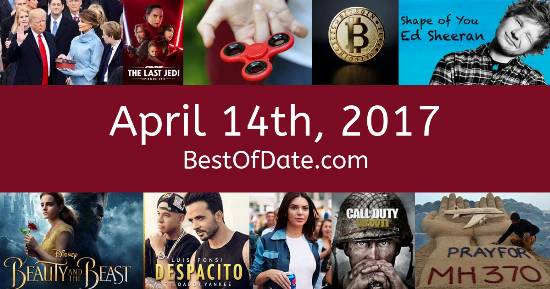 Songs that were on top of the music singles charts in the USA and the United Kingdom on April 14th, 2017:

The date is April 14th, 2017 and it's a Friday. Anyone born today will have the star sign Aries. Currently, people have "that Friday feeling" and are looking forward to the weekend.

The summer of 2017 is drawing closer and temperatures have started to rise. The song Shape of You by Ed Sheeran is on top of the singles charts in both the USA and the United Kingdom. Donald Trump is currently the President of the United States and the movie The Boss Baby is at the top of the Box Office.

In the United Kingdom, Theresa May is the current Prime Minister. It's 2017, so the music charts are being dominated by artists such as Ed Sheeran, Luis Fonsi, Bruno Mars, Kendrick Lamar, The Chainsmokers, Migos, Sam Hunt and Post Malone. The Netflix series "13 Reasons Why" has just been released.

People are currently outraged at a viral video of a passenger being forcibly removed from a United Airlines flight. The run-up to the 2017 French presidential election is currently taking place, with Emmanuel Macron squaring off against Marine Le Pen. Kendrick Lamar has just released his new album "Damn".

On TV, people are watching popular shows such as "Orange Is the New Black", "Rick and Morty", "Jane the Virgin" and "Better Call Saul". Meanwhile, gamers are playing titles such as "PlayerUnknown's Battlegrounds", "Resident Evil 7: Biohazard", "Horizon Zero Dawn" and "The Legend of Zelda: Breath of the Wild". Children and teenagers are currently watching television shows such as "The Fairly OddParents", "Doc McStuffins", "Henry Danger" and "Game Shakers".

If you're a kid or a teenager, then you're probably playing with toys such as "PlayStation 4", "Xbox One", "Fidget spinner" and "Nintendo Switch".

Who was the Prime Minister of the United Kingdom on April 14th, 2017?

Enter your date of birth below to find out how old you were on April 14th, 2017.

Looking for some nostalgia? Here are some Youtube videos relating to April 14th, 2017. Please note that videos are automatically selected by Youtube and that results may vary! Click on the "Load Next Video" button to view the next video in the search playlist. In many cases, you'll find episodes of old TV shows, documentaries, music videos and soap dramas.