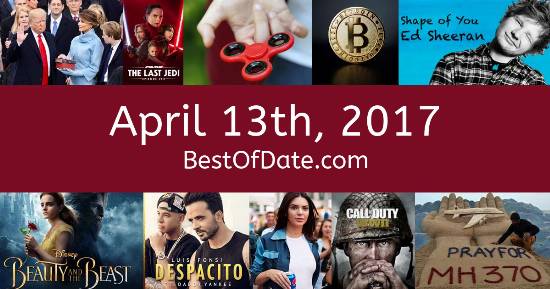 Songs that were on top of the music singles charts in the USA and the United Kingdom on April 13th, 2017.

The date is April 13th, 2017 and it's a Thursday. Anyone born today will have the star sign Aries. The summer of 2017 is drawing closer and temperatures have started to rise.

The run-up to the 2017 French presidential election is currently taking place, with Emmanuel Macron squaring off against Marine Le Pen. If you were to travel back to this day, notable figures such as Big Black, Chris Cornell, Roger Moore and Adam West would all be still alive. On TV, people are watching popular shows such as "Homeland", "Orange Is the New Black", "Power" and "Stranger Things".

Meanwhile, gamers are playing titles such as "PlayerUnknown's Battlegrounds", "Resident Evil 7: Biohazard", "Horizon Zero Dawn" and "The Legend of Zelda: Breath of the Wild". Children and teenagers are currently watching television shows such as "Horrid Henry", "Doc McStuffins", "Nicky, Ricky, Dicky & Dawn" and "The Loud House". Popular toys at the moment include the likes of L.O.L. Surprise!, Hatchimals, Fidget spinners and the Nintendo Switch.

Child actor. Deceased
Born on April 13th, 1976
He was not alive on this date.

Donald Trump was the President of the United States on April 13th, 2017.

Theresa May was the Prime Minister of the United Kingdom on April 13th, 2017.

Enter your date of birth below to find out how old you were on April 13th, 2017.