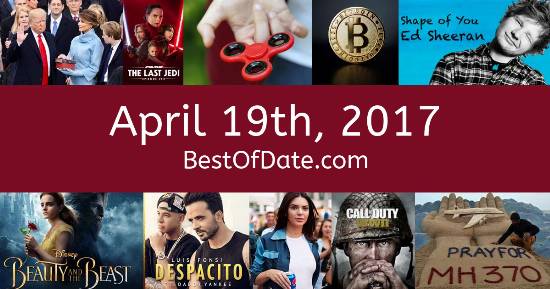 These songs were on top of the music charts in the United States and the United Kingdom on April 19th, 2017.

The movie "The Fate of the Furious" was at the top of the Box Office on this day.

The date is April 19th, 2017, and it's a Wednesday. Anyone born today will have the star sign Aries. The summer of 2017 is drawing closer and temperatures have started to rise.

The song Shape of You by Ed Sheeran is on top of the singles charts in both the USA and the United Kingdom. Donald Trump is currently the President of the United States, and the movie The Fate of the Furious is at the top of the Box Office. In the United Kingdom, Theresa May is the current Prime Minister.

Kendrick Lamar has just released his new album "Damn". People are shocked by Facebook livestream footage of Steve Stephens shooting an elderly man dead in Cleveland. Stephens has since been found dead from a self-inflicted gunshot wound. The suicide of former NFL player and convicted murderer Aaron Hernandez in prison is receiving widespread media attention. TV host Bill O'Reilly has recently been fired by Fox News over sexual harassment claims.

UK Prime Minister has just called a Snap Election. If you were to travel back to this day, notable figures such as Big Black, Chris Cornell, Roger Moore and Adam West would all be still alive. On TV, people are watching popular shows such as "Grey's Anatomy", "Prison Break", "Black-ish" and "Jane the Virgin".

Meanwhile, gamers are playing titles such as "Cities: Skylines", "PlayerUnknown's Battlegrounds", "Mafia III" and "The Legend of Zelda: Breath of the Wild". Kids and teenagers are watching TV shows such as "Dora the Explorer", "Doc McStuffins", "Henry Danger" and "Game Shakers". If you're a kid or a teenager, then you're probably playing with toys such as the Xbox One, L.O.L. Surprise!, Fidget spinners and the Nintendo Switch.

These are trending news stories and fads that were prevalent at this time. These are topics that would have been in the media on April 19th, 2017.

News stories and other events that happened around April 19th, 2017.

Check out our personality summary for people who were born on April 19th, 2017.

Television shows that people were watching in April, 2017.

Popular video games that people were playing in April of 2017.

Donald Trump was the President of the United States on April 19th, 2017.

Theresa May was the Prime Minister of the United Kingdom on April 19th, 2017.

Find out what your age was on April 19th, 2017, by entering your DOB below.
This information is not saved on our server.