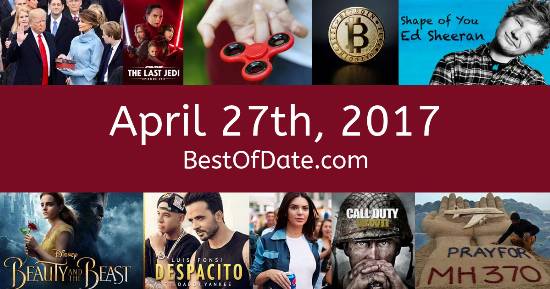 Songs that were on top of the music singles charts in the USA and the United Kingdom on April 27th, 2017:

The date is April 27th, 2017 and it's a Thursday. Anyone born today will have the star sign Taurus. The summer of 2017 is drawing closer and temperatures have started to rise.

Kendrick Lamar has just released his new album "Damn". The suicide of former NFL player and convicted murderer Aaron Hernandez in prison is receiving widespread media attention. TV host Bill O'Reilly has recently been fired by Fox News over sexual harassment claims. Details have been emerging about a fraudulent luxury music festival called "Fyre Festival". The festival, which was promoted by rapper Ja Rule, recently fell apart due to issues with security, food and accommodation.

On TV, people are watching popular shows such as "Modern Family", "Game of Thrones", "Homeland" and "Stranger Things". Meanwhile, gamers are playing titles such as "Resident Evil 7: Biohazard", "Horizon Zero Dawn", "The Legend of Zelda: Breath of the Wild" and "What Remains of Edith Finch". Kids and teenagers are watching TV shows such as "Dora the Explorer", "Henry Danger", "Nicky, Ricky, Dicky & Dawn" and "Game Shakers".

If you're a kid or a teenager, then you're probably playing with toys such as "PlayStation 4", "Xbox One", "Hatchimals" and "Fidget spinner".

Who was the Prime Minister of the United Kingdom on April 27th, 2017?

Enter your date of birth below to find out how old you were on April 27th, 2017.

Looking for some nostalgia? Here are some Youtube videos relating to April 27th, 2017. Please note that videos are automatically selected by Youtube and that results may vary! Click on the "Load Next Video" button to view the next video in the search playlist. In many cases, you'll find episodes of old TV shows, documentaries, music videos and soap dramas.