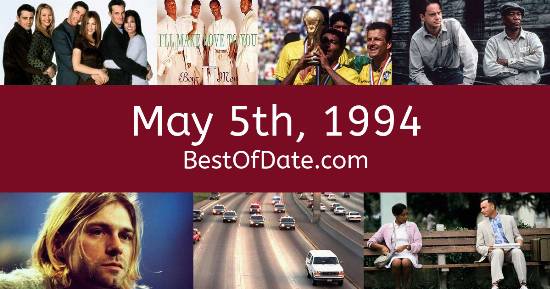 Songs that were on top of the music singles charts in the USA and the United Kingdom on May 5th, 1994.

The date is May 5th, 1994 and it's a Thursday. Anyone born today will have the star sign Taurus. The summer of 1994 has finally arrived. The weather has warmed up and the evenings are brighter than usual.

In America, the song Bump N' Grind by R. Kelly is on top of the singles charts. Over in the UK, The Most Beautiful Girl In The World by Symbol is the number one hit song. Bill Clinton is currently the President of the United States and the movie No Escape is at the top of the Box Office.

In Europe, a war is continuing to rage on in Bosnia and Herzegovina. On the continent of Africa, a horrible event is unfolding, as the Hutu majority in Rwanda attempt to wipe out the Tutsi minority. This genocide began following the assassination of President Juvenal Habyarimana. English rock band Blur have just released their new album "Parklife". The album contains songs such as "Girls & Boys".

South Africa has just held its first mixed-raced elections. The 1994 European Song Contest has been won by Ireland. The winning song was "Rock 'n' Roll Kids" by Paul Harrington and Charlie McGettigan. Formula One racing driver Ayrton Senna has died following an accident at the San Marino Grand Prix. He was only 34 years old.

In soccer, Manchester United have won the Premier League for the second season in a row. Their title win was confirmed after rivals Blackburn Rovers lost 2-1 against Coventry. If you were to travel back to this day, notable figures such as Nicole Brown Simpson, Andrés Escobar, Raul Julia and Eazy E would all be still alive. On TV, people are watching popular shows such as "Last of the Summer Wine", "The Fresh Prince of Bel-Air", "Frasier" and "Babylon 5".

Meanwhile, gamers are playing titles such as "Bubsy in Claws Encounters of the Furred Kind", "Syndicate", "Myst" and "Mega Man 6". Children and teenagers are currently watching television shows such as "Married... with Children", "Roseanne", "Taz-Mania" and "Animaniacs". If you're a kid or a teenager, then you're probably playing with toys such as Transformers, G.I. Joe (figures), Pogs and Teen Talk Barbie.

Notable events that occurred around May 5th, 1994.

If you are looking for some childhood nostalgia, then check out May 5th, 2000 instead.

Historical weather information for May 5th, 1994.

Bill Clinton was the President of the United States on May 5th, 1994.

John Major was the Prime Minister of the United Kingdom on May 5th, 1994.

Enter your date of birth below to find out how old you were on May 5th, 1994.