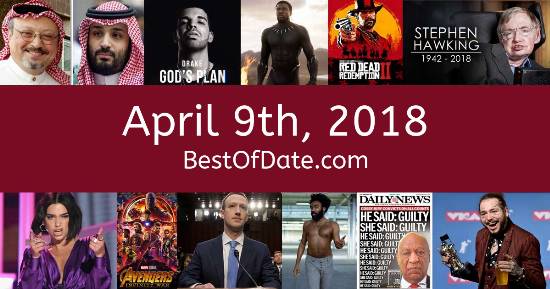 These songs were on top of the music charts in the United States and the United Kingdom on April 9th, 2018.

The date is April 9th, 2018, and it's a Monday. Anyone born today will have the star sign Aries. The summer of 2018 is drawing closer and temperatures have started to rise.

In America, the song God's Plan by Drake is on top of the singles charts. Over in the UK, These Days by Rudimental is the number one hit song. Donald Trump is currently the President of the United States, and the movie A Quiet Place is at the top of the Box Office.

On TV, people are watching popular shows such as "Modern Family", "Once Upon a Time", "Rick and Morty" and "Jane the Virgin". Meanwhile, gamers are playing titles such as "What Remains of Edith Finch", "Wolfenstein II: The New Colossus", "Super Mario Odyssey" and "Star Wars Battlefront II". Children and teenagers are currently watching television shows such as "Horrid Henry", "The Thundermans", "Nicky, Ricky, Dicky & Dawn" and "Bunnicula".

If you're a kid or a teenager, then you're probably playing with toys such as the Xbox One, the Nintendo Switch, the Star Wars Droid Inventor Kit and the Paw Patrol Lookout Tower Playset.

These are trending news stories and fads that were prevalent at this time. These are topics that would have been in the media on April 9th, 2018.

News stories and other events that happened around April 9th, 2018.

Check out our personality summary for people who were born on April 9th, 2018.

Television shows that people were watching in April, 2018.

Popular video games that people were playing in April of 2018.

Adult magazine publisher. Deceased
Born on April 9th, 1926
He was not alive on this date.

Mass murderer. Deceased
Born on April 9th, 1953
He was not alive on this date.

Donald Trump was the President of the United States on April 9th, 2018.

Theresa May was the Prime Minister of the United Kingdom on April 9th, 2018.

Find out what your age was on April 9th, 2018, by entering your DOB below.
This information is not saved on our server.

Here are some fun statistics about April 9th, 2018.