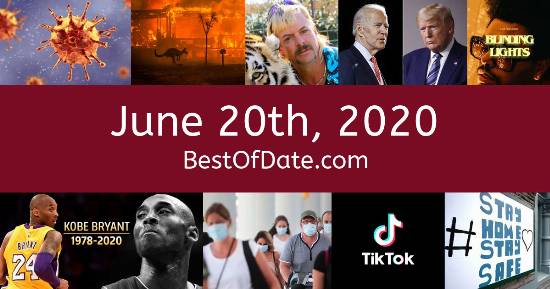 These songs were on top of the music charts in the United States and the United Kingdom on June 20th, 2020.

The top "Box Office" movie on this date was the film "The Invisible Man".

Social media users on TikTok played a prank on the Trump campaign by falsely claiming that they would be in attendance.
Posted on June 20th, 2022 18:19

The date is June 20th, 2020, and it's a Saturday. Anyone born today will have the star sign Gemini. Currently, people are enjoying their weekend.

It's summer, so the temperatures are warmer and the evenings are longer than usual. The song Rockstar by DaBaby is on top of the singles charts in both the USA and the United Kingdom. Donald Trump is currently the President of the United States, and the movie The Invisible Man is at the top of the Box Office.

In the United Kingdom, Boris Johnson is the current Prime Minister. Many countries and US states have come out of their Covid-19 lockdowns. However, restrictions remain and many people are still working from home. Governments across the world are now focusing their efforts on trying to live with the virus. If you were to travel back to this day, notable figures such as Naya Rivera, Herman Cain, Chadwick Boseman and Ruth Bader Ginsburg would all be still alive.

On TV, people are watching popular shows such as "Grey's Anatomy", "The Walking Dead" and "Black-ish". Meanwhile, gamers are playing titles such as "Call of Duty: Modern Warfare", "Death Stranding" and "Pokémon Sword and Shield". Kids and teenagers are watching TV shows such as "Horrid Henry", "Agents of S.H.I.E.L.D." and "The Loud House".

These are trending news stories and fads that were prevalent at this time. These are topics that would have been in the media on June 20th, 2020.

Check out our personality summary for people who were born on June 20th, 2020.

Television shows that people were watching in June, 2020.

Popular video games that people were playing in June of 2020.

Donald Trump was the President of the United States on June 20th, 2020.

Boris Johnson was the Prime Minister of the United Kingdom on June 20th, 2020.

Enter your date of birth below to find out how old you were on June 20th, 2020.
This information is not transmitted to our server.