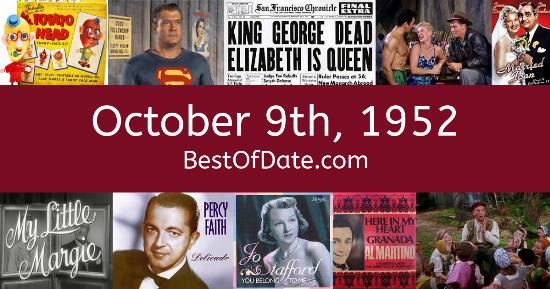 The best-selling single on October 9th, 1952 was "You Belong to Me" by Jo Stafford.

The date is October 9th, 1952, and it's a Thursday. Anyone born today will have the star sign Libra. The summer is long gone. Temperatures have started to become much cooler and the evenings are beginning to get darker.

Fallen leaves have carpeted driveways, lawns, pathways and sidewalks and there's a fresh earthy scent in the ear. In music, the song "You Belong to Me" by Jo Stafford is the best-selling record at the moment. Harry S. Truman is currently the President of the United States, and Winston Churchill is the Prime Minister of the United Kingdom.

If you were to travel back to this day, notable figures such as Hank Williams would be still alive. On TV, people are watching popular shows such as "What's My Line?", "You Bet Your Life", "I Love Lucy" and "My Little Margie". Kids and teenagers are watching TV shows such as "Looney Tunes", "Tom and Jerry", "Crusader Rabbit" and "Adventures of Superman".

If you're a kid or a teenager, then you're probably playing with toys such as Toy Guns, BAS-KET Miniature Basketball, Butch the Pup Toy and Mr. Potato Head.

These are trending news stories and fads that were prevalent at this time. These are topics that would have been in the media on October 9th, 1952.

News stories and other events that happened around October 9th, 1952.

Check out our personality summary for people who were born on October 9th, 1952.

If you are looking for some childhood nostalgia, then you should check out October 9th, 1958 instead.

British Prime Minister.
Born on October 9th, 1966
He was born exactly 14 years after this date.

Wrestler. Deceased
Born on October 9th, 1967
He was born exactly 15 years after this date.

Rapper. Deceased
Born on October 9th, 1977
He was born exactly 25 years after this date.

Harry S. Truman was the President of the United States on October 9th, 1952.

Winston Churchill was the Prime Minister of the United Kingdom on October 9th, 1952.

Find out what your age was on October 9th, 1952, by entering your DOB below.
This information is not saved on our server.

Here are some fun statistics about October 9th, 1952.