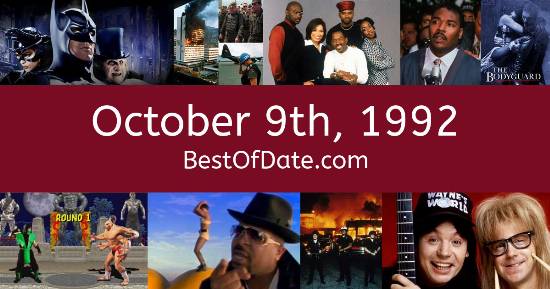 These songs were on top of the music charts in the United States and the United Kingdom on October 9th, 1992.

The movie "The Last of the Mohicans" was at the top of the Box Office on October 9th, 1992.

The date is October 9th, 1992, and it's a Friday. Anyone born today will have the star sign Libra. Currently, people have "that Friday feeling" and are looking forward to the weekend.

Over in the UK, Ebenezer Goode by Shamen is the number one hit song. George W. Bush Snr. is currently the President of the United States, and the movie The Last of the Mohicans is at the top of the Box Office. In the United Kingdom, John Major is the current Prime Minister.

In fashion, many of the trends from the late 80s are still in vogue. Colored tights, denim overalls, leotards, flannel shirts and shoulder pads are all fashionable at the moment. Grunge fashion has also become mainstream, popularizing band t-shirts, ripped jeans, mom jeans and Doc Martens. In Europe, a war is continuing to rage on in Bosnia and Herzegovina. A new cable television network called "Cartoon Network" has just been launched.

In the United States, the campaign for the 1992 presidential election is in full swing, with Democratic Party nominee Bill Clinton taking on Republican incumbent George H. W. Bush. Irish singer Sinead O'Connor has recently sparked controversy by tearing up a photograph of The Pope on Saturday Night Live. O'Connor's actions were in protest against the sexual abuse of children in the Catholic Church. Meanwhile, the films "The Mighty Ducks" and "Under Siege" have just been released in movie theaters.

If you were to travel back to this day, notable figures such as Audrey Hepburn, Thurgood Marshall, Andre the Giant and Bobby Moore would all be still alive. On TV, people are watching popular shows such as "Knots Landing", "Only Fools and Horses", "Sherlock Holmes" and "Married... with Children". Meanwhile, gamers are playing titles such as "F-16 Combat Pilot", "The Legend of Zelda: A Link to the Past", "Yoshi" and "Ecco the Dolphin".

Children and teenagers are currently watching television shows such as "Thomas the Tank Engine", "Roseanne", "The Fresh Prince of Bel-Air" and "Hangin' with Mr. Cooper". Popular toys at the moment include the likes of Cabbage Patch Kids, Micro Machines, the SEGA Game Gear and Teen Talk Barbie.

These are trending news stories and fads that were prevalent at this time. These are topics that would have been in the media on October 9th, 1992.

News stories and other events that happened around October 9th, 1992.

Check out our personality summary for people who were born on October 9th, 1992.

Television shows that people were watching in October, 1992.

Popular video games that people were playing in October of 1992.

If you are looking for some childhood nostalgia, then you should check out October 9th, 1998 instead.

Singer. Deceased
Born on October 9th, 1940
He was not alive on this date.

NFL player.
Born on October 9th, 1993
He was born exactly one year after this date.

George W. Bush Snr. was the President of the United States on October 9th, 1992.

John Major was the Prime Minister of the United Kingdom on October 9th, 1992.

Find out what your age was on October 9th, 1992, by entering your DOB below.
This information is not saved on our server.

Here are some fun statistics about October 9th, 1992.