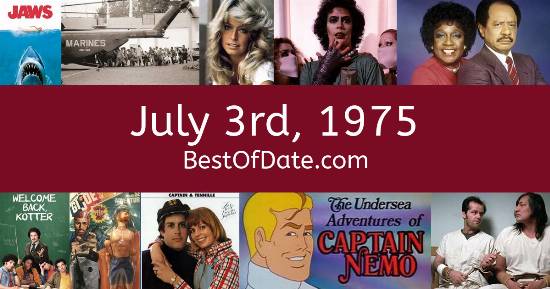 Songs that were on top of the music singles charts in the USA and the United Kingdom on July 3rd, 1975.

The date is July 3rd, 1975 and it's a Thursday. Anyone born today will have the star sign Cancer. In America, the July 4th celebrations are fast approaching.

Steven Spielberg's film "Jaws" is being played in movie theaters at the moment. On TV, people are watching popular shows such as "Columbo.", "M*A*S*H", "Kojak" and "Baretta". Meanwhile, gamers are playing titles such as "Pong", "Space Race", "Gotcha" and "Tank".

Children and teenagers are currently watching television shows such as "Sesame Street", "All in the Family", "Star Trek: The Animated Series" and "The New Adventures of Gilligan". If you're a kid or a teenager, then you're probably playing with toys such as the Easy-Bake Oven, Battleship (game), Weebles and Pet Rock.

Gerald Ford was the President of the United States on July 3rd, 1975.

Harold Wilson was the Prime Minister of the United Kingdom on July 3rd, 1975.

Enter your date of birth below to find out how old you were on July 3rd, 1975.

Here are some fun statistics about July 3rd, 1975.