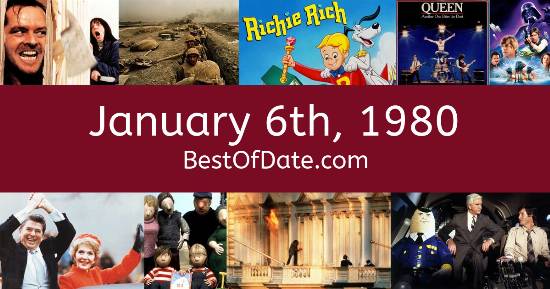 These songs were on top of the music charts in the United States and the United Kingdom on January 6th, 1980.

The movie "Star Trek: The Motion Picture" was at the top of the Box Office on January 6th, 1980.

The date is January 6th, 1980, and it's a Sunday. Anyone born today will have the star sign Capricorn. Currently, people are enjoying their weekend.

People are starting to return back to work and school after the Christmas holidays. In America, the song Please Don't Go by KC & Sunshine Band is on top of the singles charts. Over in the UK, Another Brick In The Wall by Pink Floyd is the number one hit song.

Jimmy Carter is currently the President of the United States, and the movie Star Trek: The Motion Picture is at the top of the Box Office. In the United Kingdom, Margaret Thatcher is the current Prime Minister. Because it's 1980, the radio stations are being dominated by artists such as Pink Floyd, Barbra Streisand, John Lennon, Lipps Inc, Diana Ross, Blondie and Kenny Rogers.

In fashion, women are currently wearing jelly shoes, turtleneck sweaters, loose high-waist pants, crop tops and puffer jackets lined with fur. Meanwhile, men have been ditching the disco look of the 70s in favor of athletic clothing such as tracksuits and sports jerseys. The "preppy" look has also been making a comeback. If you were to travel back to this day, notable figures such as Alfred Hitchcock, Ian Curtis, Steve McQueen and John Lennon would all be still alive. On TV, people are watching popular shows such as "Barnaby Jones", "Happy Days", "Little House on the Prairie" and "The Facts of Life".

Meanwhile, gamers are playing titles such as "Breakout", "Space Invaders", "Lunar Lander" and "Asteroids". Kids and teenagers are watching TV shows such as "The Bugs Bunny Show", "Sesame Street", "Happy Days" and "Captain Caveman and the Teen Angels". Popular toys at the moment include the likes of Dungeons & Dragons, Water Ring Toss, Hungry Hungry Hippos and Big wheel (tricycle).

These are trending news stories and fads that were prevalent at this time. These are topics that would have been in the media on January 6th, 1980.

Check out our personality summary for people who were born on January 6th, 1980.

Television shows that people were watching in January, 1980.

Popular video games that people were playing in January of 1980.

If you are looking for some childhood nostalgia, then you should check out January 6th, 1986 instead.

American businessman.
Born on January 6th, 1984
He was born exactly 4 years after this date.

Model.
Born on January 6th, 1986
She was born exactly 6 years after this date.

Soccer player.
Born on January 6th, 1989
He was born exactly 9 years after this date.

Jimmy Carter was the President of the United States on January 6th, 1980.

Margaret Thatcher was the Prime Minister of the United Kingdom on January 6th, 1980.

Enter your date of birth below to find out how old you were on January 6th, 1980.
This information is not transmitted to our server.

Here are some fun statistics about January 6th, 1980.