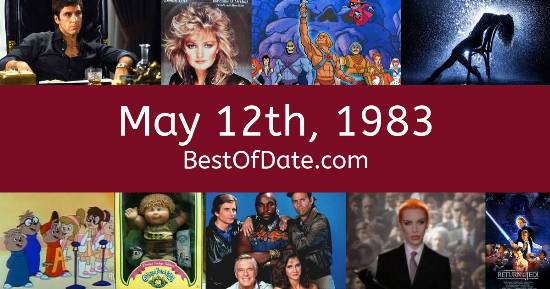 Songs that were on top of the music singles charts in the USA and the United Kingdom on May 12th, 1983.

The date is May 12th, 1983 and it's a Thursday. Anyone born today will have the star sign Taurus. The summer of 1983 has finally arrived. The weather has warmed up and the evenings are brighter than usual.

In America, the song Beat It by Michael Jackson is on top of the singles charts. Over in the UK, True by Spandau Ballet is the number one hit song. Ronald Reagan is currently the President of the United States and the movie Flashdance is at the top of the Box Office.

On TV, people are watching popular shows such as "Columbo.", "The Love Boat", "The Dukes of Hazzard" and "Knots Landing". Meanwhile, gamers are playing titles such as "Space Invaders", "Lunar Lander", "Missile Command" and "Donkey Kong". Kids and teenagers are watching TV shows such as "Diff'rent Strokes", "The Smurfs", "Danger Mouse" and "Fraggle Rock".

Popular toys at the moment include the likes of Hungry Hungry Hippos, Monchhichi / Chicaboo, the Commodore 64 and My Little Pony (figures).

Notable events that occurred around May 12th, 1983.

Celebrities, historical figures and notable people who were born on the 12th of May.

Ronald Reagan was the President of the United States on May 12th, 1983.

Margaret Thatcher was the Prime Minister of the United Kingdom on May 12th, 1983.

Leave a comment and tell everyone why May 12th, 1983 is important to you.