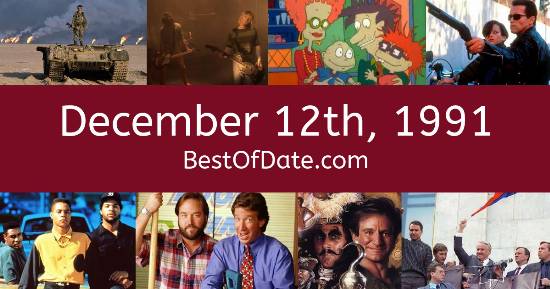 Songs that were on top of the music singles charts in the USA and the United Kingdom on December 12th, 1991:

The date is December 12th, 1991 and it's a Thursday. Anyone born today will have the star sign Sagittarius. The Christmas season of 1991 is in full swing. The decorations are up and festive songs are playing on the radio.

In America, the song Black Or White by Michael Jackson is on top of the singles charts. Over in the UK, Don't Let The Sun Go Down On Me by George Michael & Elton John is the number one hit song. George W. Bush Snr. is currently the President of the United States and the movie Star Trek VI: The Undiscovered Country is at the top of the Box Office.

It's 1991, so the airwaves are being dominated by artists such as Bryan Adams, Michael Jackson, Roxette, R.E.M., Color Me Badd and Paula Abdul. A rock subgenre called "Grunge" is starting to rise in popularity. In Europe, the Soviet Union is coming to an end as the leaders of Russia, Belarus and Ukraine agree to dissolve the union.

Meanwhile, gamers are playing titles such as "SimCity", "Railroad Tycoon", "F-16 Combat Pilot" and "Super Castlevania IV". Children and teenagers are currently watching television shows such as "Roseanne", "Noozles", "Rosie and Jim" and "The Adventures of Pete & Pete". If you're a kid or a teenager, then you're probably playing with toys such as "Easy-Bake Oven", "My Little Pony (figures)", "Sega Genesis / Mega Drive" and "Yo-yo".

Celebrities and historical figures that were born on the 12th of December:

Who was the Prime Minister of the United Kingdom on December 12th, 1991?

Enter your date of birth below to find out how old you were on December 12th, 1991.

Looking for some nostalgia? Here are some Youtube videos relating to December 12th, 1991. Please note that videos are automatically selected by Youtube and that results may vary! Click on the "Load Next Video" button to view the next video in the search playlist. In many cases, you'll find episodes of old TV shows, documentaries, music videos and soap dramas.

Here are some fun statistics about December 12th, 1991.