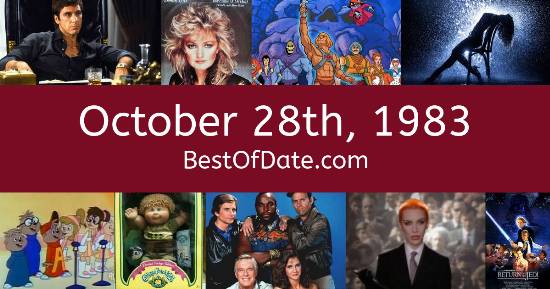 Songs that were on top of the music singles charts in the USA and the United Kingdom on October 28th, 1983:

The date is October 28th, 1983 and it's a Friday. Anyone born today will have the star sign Scorpio. Currently, people have "that Friday feeling" and are looking forward to the weekend.

The summer is long gone. Temperatures have started to become much cooler and the evenings are beginning to get darker. Fallen leaves have carpeted driveways, lawns, pathways and sidewalks and there's a fresh earthy scent in the ear. Halloween of 1983 is just days away. People are watching horror movies and thinking about which costume they are going to wear. Others are organizing parties.

In America, the song Total Eclipse Of The Heart by Bonnie Tyler is on top of the singles charts. Over in the UK, Karma Chameleon by Culture Club is the number one hit song. Ronald Reagan is currently the President of the United States and the movie Never Say Never Again is at the top of the Box Office.

On TV, people are watching popular shows such as "Columbo.", "Dallas", "Knight Rider" and "Scarecrow and Mrs. King". Meanwhile, gamers are playing titles such as "Lunar Lander", "Pac-Man", "Missile Command" and "Mario Bros.". Kids and teenagers are watching TV shows such as "Captain Kangaroo", "Fat Albert and the Cosby Kids", "The Smurfs" and "He-Man and the Masters of the Universe".

If you're a kid or a teenager, then you're probably playing with toys such as "Big Jim (action figure)", "Speak & Spell", "Cabbage Patch Kids" and "Intellivision (games console)".

Who was the Prime Minister of the United Kingdom on October 28th, 1983?

Enter your date of birth below to find out how old you were on October 28th, 1983.

Looking for some nostalgia? Here are some Youtube videos relating to October 28th, 1983. Please note that videos are automatically selected by Youtube and that results may vary! Click on the "Load Next Video" button to view the next video in the search playlist. In many cases, you'll find episodes of old TV shows, documentaries, music videos and soap dramas.

Here are some fun statistics about October 28th, 1983.