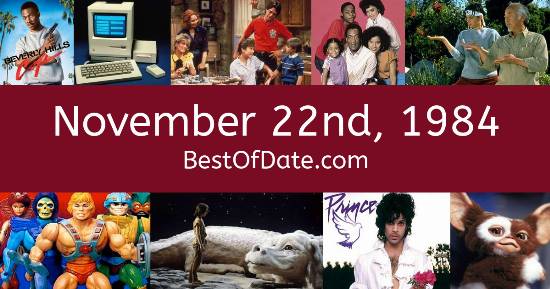 These songs were on top of the music charts in the United States and the United Kingdom on November 22nd, 1984.

The top "Box Office" movie on this date was the film "Missing in Action".

The date is November 22nd, 1984, and it's a Thursday. Anyone born today will have the star sign Sagittarius. In America, families are currently celebrating Thanksgiven Day.

It's November, so the evenings are getting darker and the days are getting colder. In America, the song Wake Me Up Before You Go-go by Wham is on top of the singles charts. Over in the UK, I Feel For You by Chaka Kahn is the number one hit song.

Ronald Reagan is currently the President of the United States, and the movie Missing in Action is at the top of the Box Office. In the United Kingdom, Margaret Thatcher is the current Prime Minister. In fashion, women are currently wearing long sweaters, fishnet stockings, fingerless gloves, jumpsuits, over-sized scarves, miniskirts, stirrup pants and spandex cycling shorts. Meanwhile, men are wearing Hawaiian shirts, flannel, shell suits and wool sport coats.

Because it's 1984, the radio stations are being dominated by artists such as George Michael, Stevie Wonder, Wham!, Cyndi Lauper and Frankie Goes to Hollywood. If you were to travel back to this day, notable figures such as Kiki Camarena, David Huffman, Rock Hudson and Paul Castellano would all be still alive. On TV, people are watching popular shows such as "The A-Team", "Night Court", "Who's the Boss?" and "Murder, She Wrote".

Meanwhile, gamers are playing titles such as "Space Invaders", "Missile Command", "Donkey Kong" and "Duck Hunt". Children and teenagers are currently watching television shows such as "Mister Rogers' Neighborhood", "Diff'rent Strokes", "Mister T" and "The Cosby Show". If you're a kid or a teenager, then you're probably playing with toys such as the Easy-Bake Oven, Big Jim (action figure), Dungeons & Dragons and Pound Puppies.

These are trending news stories and fads that were prevalent at this time. These are topics that would have been in the media on November 22nd, 1984.

Check out our personality summary for people who were born on November 22nd, 1984.

Television shows that people were watching in November, 1984.

Popular video games that people were playing in November of 1984.

If you are looking for some childhood nostalgia, then you should check out November 22nd, 1990 instead.

Runner and convicted murderer.
Born on November 22nd, 1986
He was born exactly 2 years after this date.

National holidays and famous events that fall on the 22nd of November.

Ronald Reagan was the President of the United States on November 22nd, 1984.

Enter your date of birth below to find out how old you were on November 22nd, 1984.
This information is not transmitted to our server.

Here are some fun statistics about November 22nd, 1984.