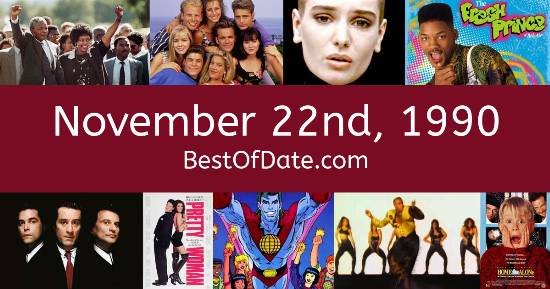 Songs that were on top of the music singles charts in the USA and the United Kingdom on November 22nd, 1990.

The date is November 22nd, 1990 and it's a Thursday. Anyone born today will have the star sign Sagittarius. In America, families are currently celebrating Thanksgiven Day.

George W. Bush Snr. is currently the President of the United States and the movie Child's Play 2 is at the top of the Box Office. In the United Kingdom, Margaret Thatcher is the current Prime Minister. Texting is not a thing yet. Instead, people are using landline phones and pagers. Furthermore, the vast majority of people still have no idea what "the Internet" is.

A civil war has broken out in the African nation of Rwanda. In Europe, the Soviet Union is continuing to dissolve. Pop star Madonna has just released her greatest hits album "The Immaculate Collection".

New Zealand is in shock following the news that a mass shooting in Aramoana has claimed the lives of 13 people. R&B group Milli Vanilli have been stripped of their Grammy following revelations that they had been lip-syncing. The films "Rocky V", "Home Alone" and "Predator 2" currently being shown in movie theaters.

Following a leadership challenge, Margaret Thatcher has decided to step down as leader of the Conservative Party after 15 years of being in charge. If you were to travel back to this day, notable figures such as Roald Dahl, John Bardeen, Miles Davis and Freddie Mercury would all be still alive. On TV, people are watching popular shows such as "The Cosby Show", "Who's the Boss?", "Quantum Leap" and "Family Matters".

Meanwhile, gamers are playing titles such as "The Revenge of Shinobi", "Castlevania III: Dracula's Curse", "Super Mario World" and "Castle of Illusion Starring Mickey Mouse". Kids and teenagers are watching TV shows such as "Danger Mouse", "21 Jump Street", "Count Duckula" and "Rosie and Jim". Popular toys at the moment include the likes of the Nintendo Entertainment System, Popples, Jenga and the Ghostbusters Proton Pack.

If you are looking for some childhood nostalgia, then check out November 22nd, 1996 instead.

Model.
Born on November 22nd, 1996
She was born exactly 6 years after this date.

National holidays and famous events that fall on the 22nd of November.

George W. Bush Snr. was the President of the United States on November 22nd, 1990.

Margaret Thatcher was the Prime Minister of the United Kingdom on November 22nd, 1990.

Enter your date of birth below to find out how old you were on November 22nd, 1990.

Here are some fun statistics about November 22nd, 1990.